Let the choirs of archangels, angels, seraphim and cherubim (and all the others) cry forth “Hallelujah!”, for it is once again white truffle season, that time of year when we spend vast fortunes on an underground fungus that looks like a mummified testicle but, when thinly shaved, releases a transcendent and heavenly smell that takes you to a relaxed, blissful place. And it tastes pretty good too.

The white truffle industry can be cut-throat thanks to the fortunes that can be made by the collectors – in 2009 they were selling for $14,203.50 per kg. It’s no surprise they jealously guard their hunting grounds in Piedmont, northern Italy, from outsiders. This, added to the truffles’ short shelf life, especially when cut into, means that restaurants can charge a premium for the inclusion of this delicate fungus in a meal. While some restaurants design specific dishes or menus, others will offer a grating of white truffle on any dish on their menu – whether or not it suits – for upwards of £35. In most cases, though, it isn’t worth the money; the dishes are too complex to allow the truffle to sing. White truffle should be treated gently and in the Italian style: generously shaved onto tagliatelle or even, as is traditional with hunters in northern Italy out in the morning, over fried eggs and toast as breakfast. There is, however, one other perfect way to use white truffle, and that’s in a martini. It sounds mad and just plain wrong, but boy oh boy is it not. 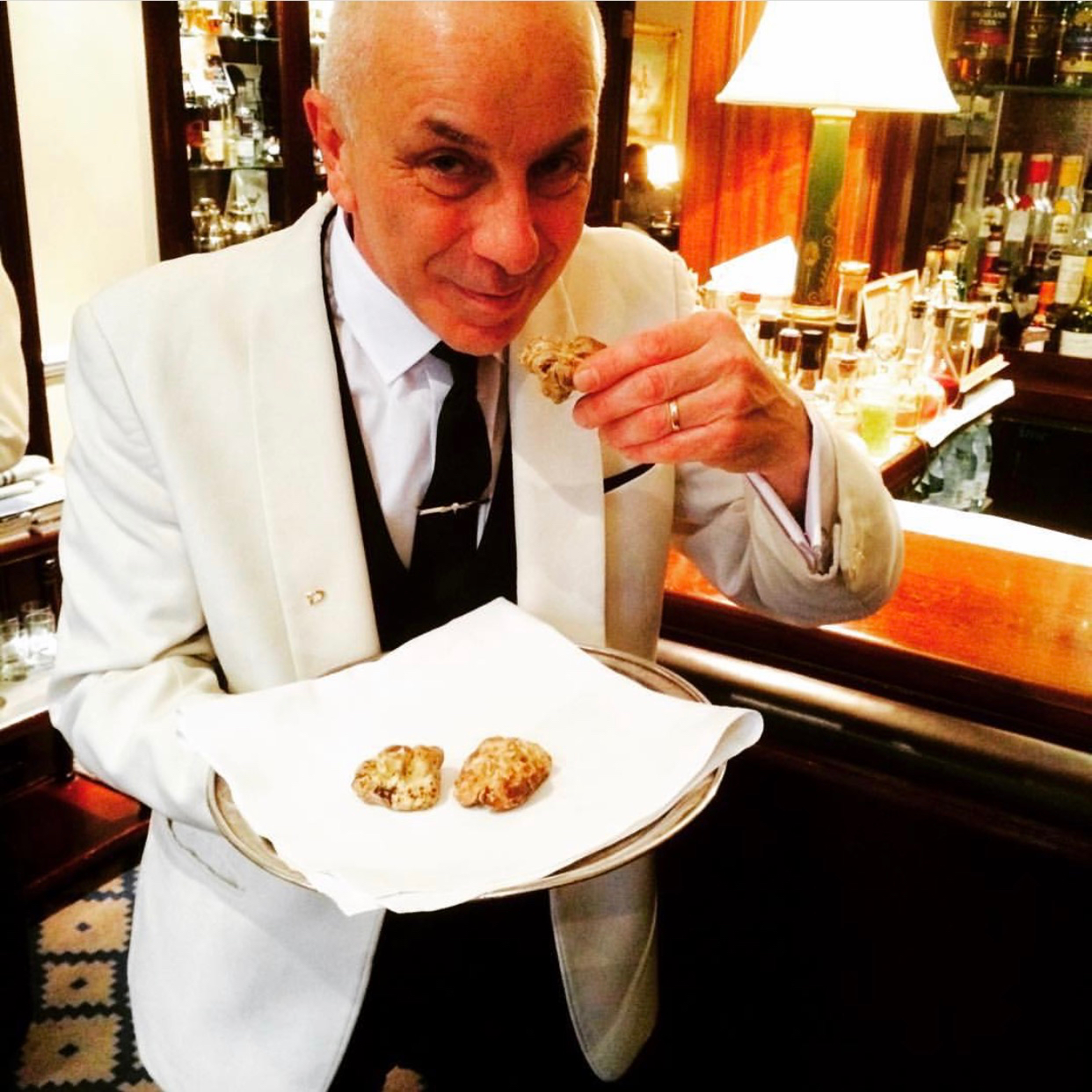 For fifteen years, Alessandro Palazzi, one of the most highly respected and admired cocktail makers, James Bond aficionado, head barman at Dukes Hotel in St James’s, and, you might say, one of the original enfants terribles of the bar world, challenging the strict cocktail mixing confines that were so rigorously enforced into the late twentieth century, has been making annually and refining his white truffle martini.

This vodka-based truffle martini is served, as all martinis at Dukes are, straight from the freezer, poured directly into a glass also from the freezer. There is no stirring, shaking or any unnecessary tampering with the ingredients; instead just a glass of pure alcoholic perfection mixed before your eyes on the trolley that Alessandro designed and had made specifically.

What’s presented to me is a glass of three quarters truffle vodka, to which has been added a splash of vermouth, then topped off with a little more vodka to the point that the glass is almost overflowing, and with an olive sitting at the bottom. If you’re lucky, and they’ve been able to source it, your olive will be stuffed with truffle cheese so you get a real hit at the end as you bite into it, having had that last sip of martini. It is a drink of pure, unadulterated, truffle pleasure that only intensifies as you get further down the glass.

When I speak with Alessandro about the dink he tells me it’s something he’s been refining for the last fifteen years, but it came about by pure accident. The restaurant attached to the bar where he was working at the time had got in a load of white truffles, but it was clear they didn’t know how to use them properly. “So I took some with the intention of showing them how to make a truffle risotto, but somehow ended up slicing them up and putting them in a bottle of vodka and forgetting all about it till one of my team saw it months later and asked what it was.”

Since then, each year when the trifola d’Alba Madonna (as it is known in his native Italy) are in season he makes a small batch of the infused vodka that comprises the majority of the drink. “I was the first to make the truffle martini and others have tried to copy it, so I keep the ingredients a closely guarded secret. Not even my team know the final secret ingredient and they know all my recipes; I go into a little room, lock the door and add the last ingredient.” 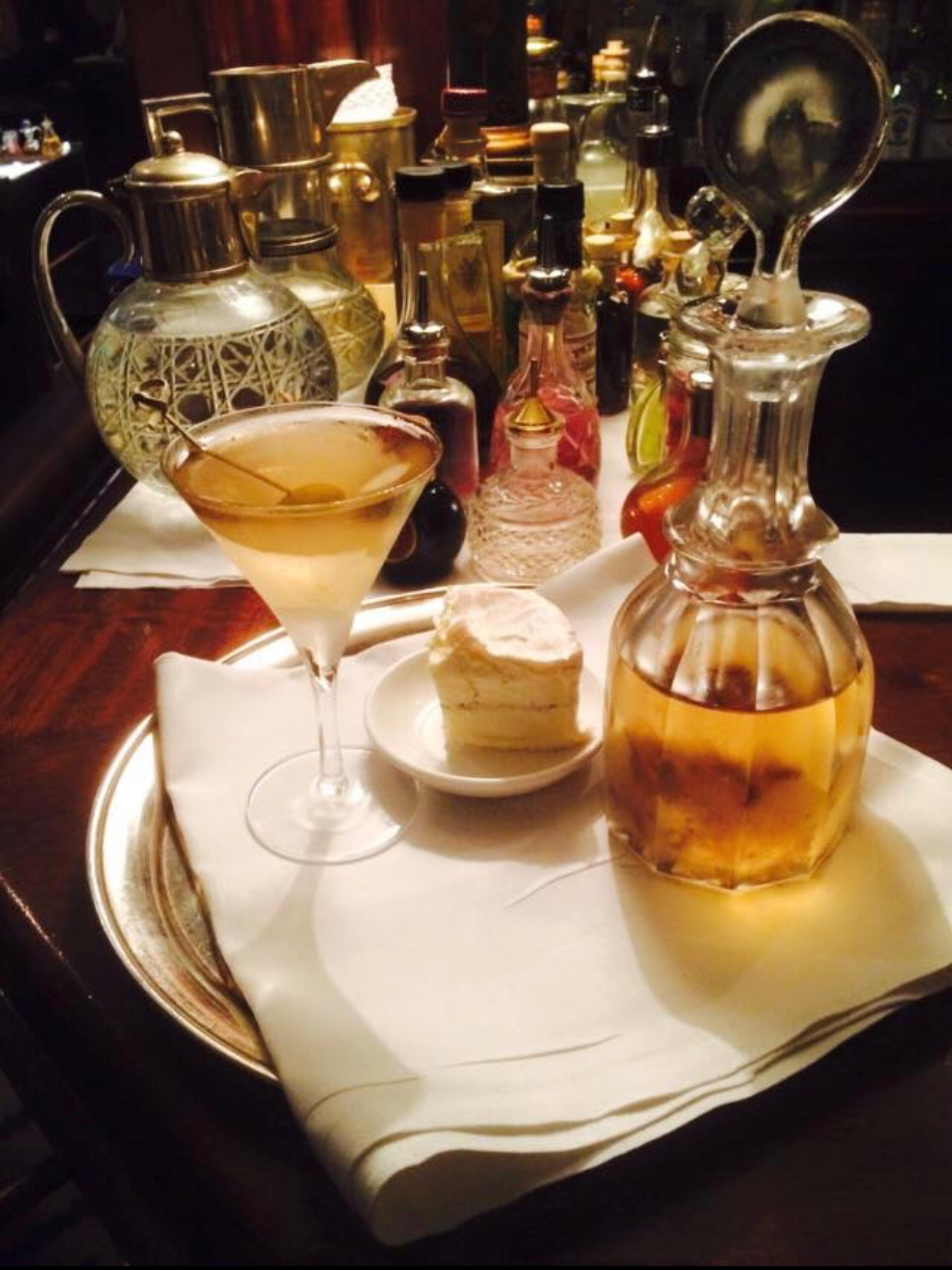 What he will say is that it’s a key ingredient and secret in and of itself. Furthermore, you have to freeze the bottles while they infuse and the bottle plays a role as the inside is coated, too, with a secret ingredient, affecting the flavour in the same way a barrel affects the whisky aging in it. He also tells me that the twelve small bottles he makes each year are left to infuse for a month, meaning the drink is ready around mid-November, and that it takes only 300g or so of sliced white truffle to make the twelve bottles (what size the bottles are I do not know).

Alessandro is insistent that the ingredients must be 100% natural and of the highest quality, as with all the ingredients he uses at Dukes. “I’ve tried using truffles from Croatia, but the flavour was just awful and the quality of them was so low, and I won’t use any of that nasty white truffle oil as the flavouring is nothing but artificial chemicals; nothing annoys me more than when a restaurant tries to fob you off with a little of the truffle and then boost it with the oil to make you think you’ve had your money’s worth.”

When the bill comes I’m pleasantly surprised to find that the truffle martini was ‘only’ £26. I had had visions of it costing nearer £50 than £20, but this is Dukes after all and despite on the face of it the average martini (with service) looking expensive, costing approximately £20, it’s actually one of the best-priced drinks in London. The alcohol used is always the very best, is poured straight from the frozen bottle to the frozen glass meaning it isn’t watered down as any cocktail that is shaken or stirred over ice is, the lemons are flown in from the Amalfi Coast and the olives from Sicily.

What this all combines to produce is an exquisite cocktail made up of at least five full measures of spirits. When you consider that a double G&T can easily cost you £12, I’ve had them cost £20 recently, millilitre for millilitre you get far more for your money at Dukes than anywhere else.

I had been drinking from the last little bit Alessandro had kept back from last year. I paid and took my leave, with it firmly in my mind to return in a few weeks to try this year’s batch of the truffled vodka and its truffle martini.