In a city as old as London it’s hardly surprising that it’s covered in little quirks and items of interest. Westminster is ram packed with facts and features that you wont notice unless you’re looking for them. We’ve put together our list of the best to keep an eye out for as you go round the area. We’ve even included a map and walking route for you to use and go exploring with. 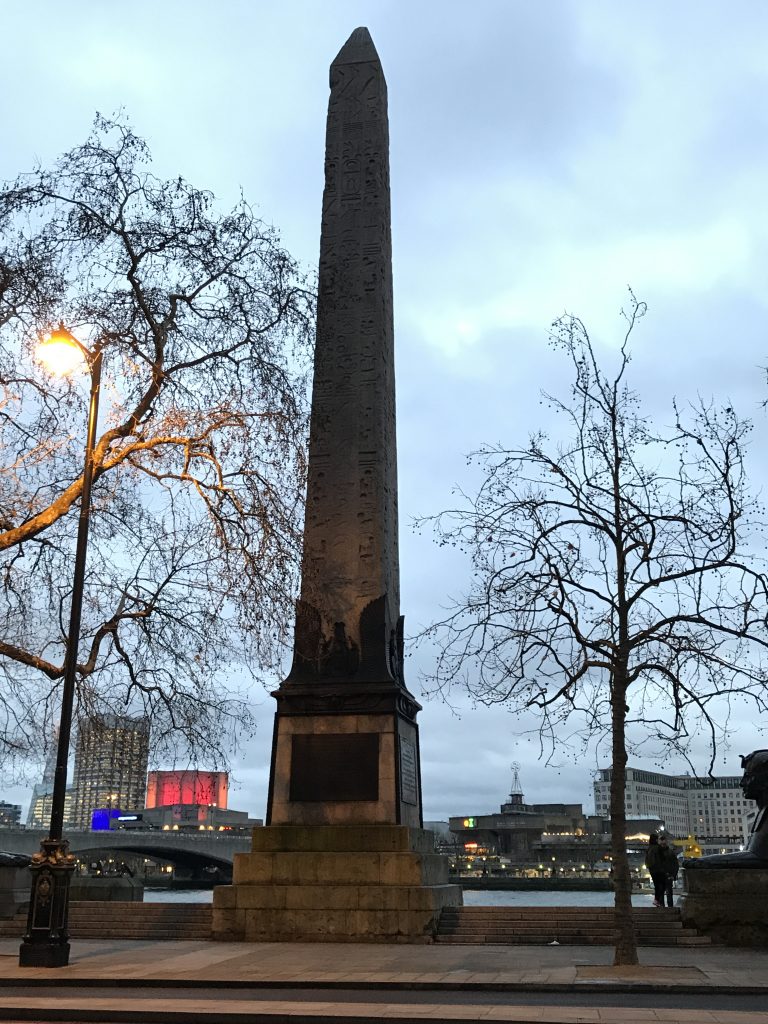 Found on the Victoria Embankment, it was presented to the United Kingdom in 1819 by Sudan Muhammad Ali the ruler of Egypt to commemorate the victories of Lord Nelson at the Battle of the Nile and Sir Ralph Abercromby at the Battle of Alexandria in 1801. The British government welcomed the gift but refused to pay to transport it to London. It was only in 1877 that a private individual paid £10,000 (a lot of money then) to have it dug out of the sand that had buried it for 2000 years and ship it to London. It was eventually erected in 1878 with a time capsule placed below it. During World War I, a bomb from a German air raid landed near the needle. To this day the damage remains unrepaired and is easily visible in the form of holes and gouges on the right-hand side. 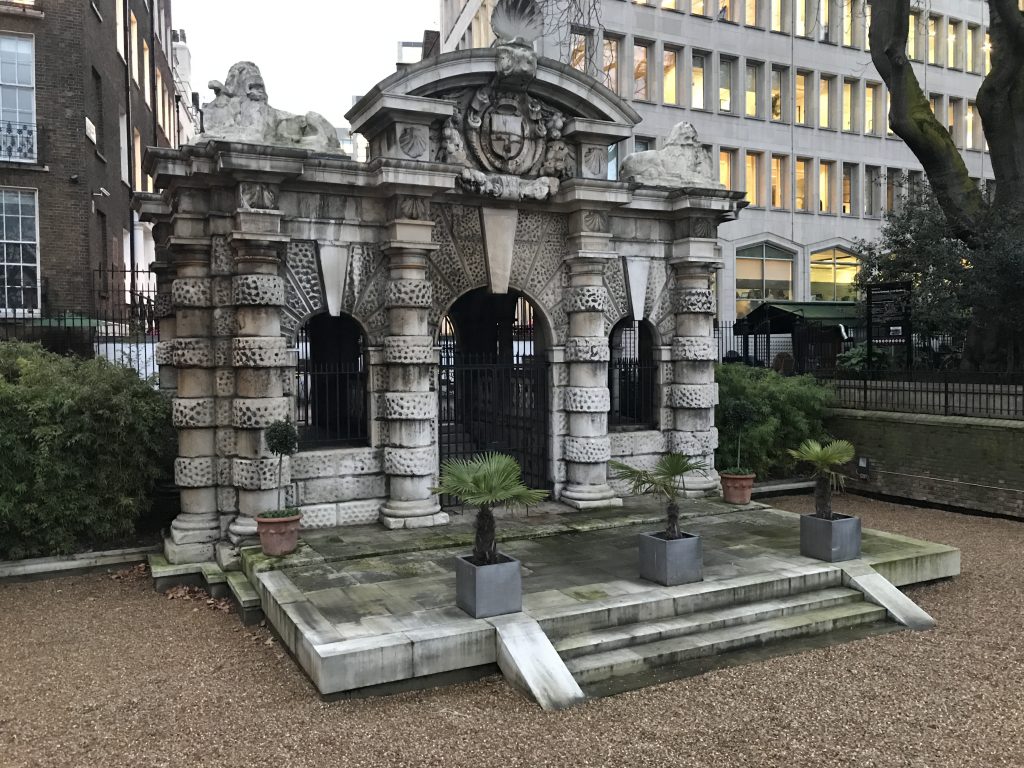 The great architect Inigo Jones designed the Watergate in 1626 as the water entrance to York House. Then owned by the Duke of Buckingham, the house was one in the line of palaces along the edge of The Thames owned by the Nobility leading from The City to the Palace of Westminster and the court of the Monarch. Now 150 meters from the edge of the river, it hasn’t been moved, instead like Traitors Gate at The Tower and the Embankment front of Somerset House (on the site of another such Thames front house/palace) it marks how the river changed and became narrower when the Embankment was built by the Victorians to house the sewers and Underground lines.

Equestrian Statue of Charles I – The Centre of London Statue 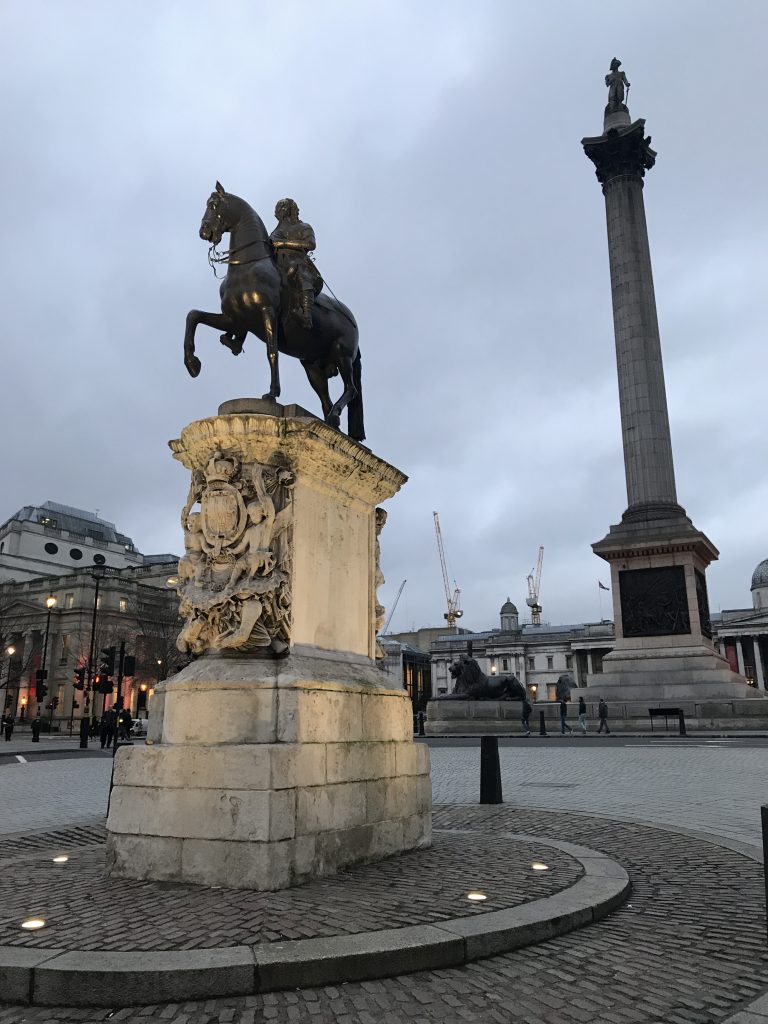 Ever wondered where it is they measure the distance to London to? The outskirts? The River? Big Ben? Well it’s this statue of Charles I. Set in the middle of a traffic island, the statue is on the spot of the last of 12 crosses erected in 1290 by Edward I to mark the resting spot of his wife’s body (Queen Eleanor of Castile) en route back to London from Lincoln. The cross also gives its name to the station Charing Cross where a replica monument stands. Since then the brass plaque now at the foot of Charles I’s statue has been the mark from which all mileage distances in Britain are measured. 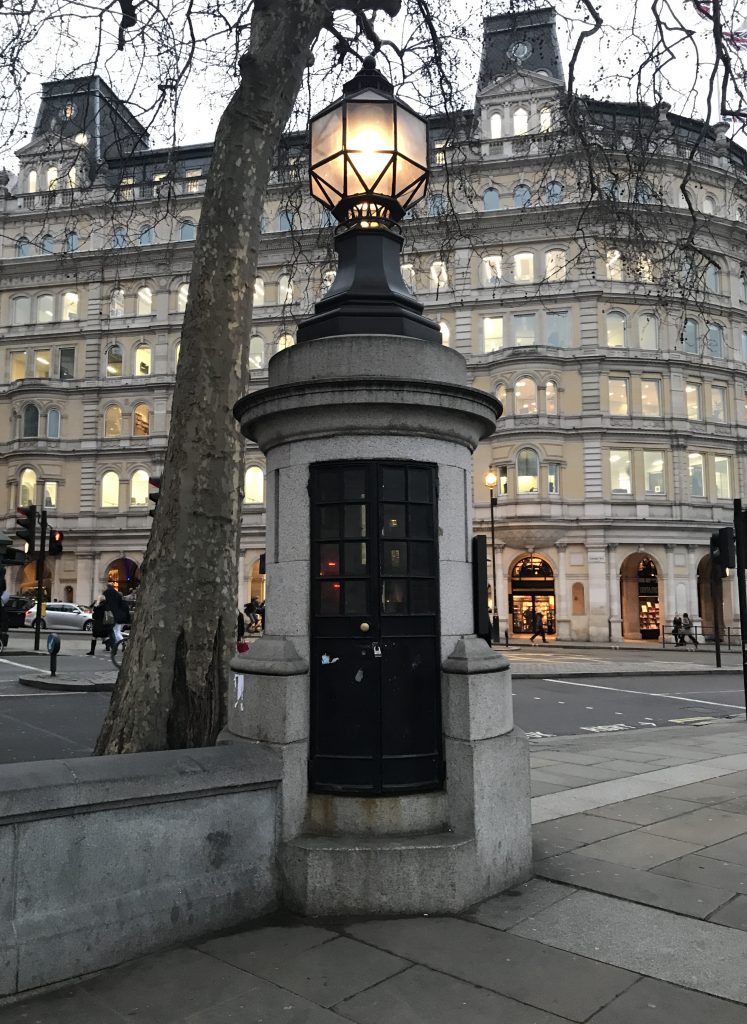 Just next to Nelson’s Column you’ll find a hollowed out granite pillar topped with an ornate lantern (some suggest this strange shaped lantern was on Nelson’s HMS Victory). Today it’s just a storeroom for cleaning equipment, but the list of Trafalgar Square’s bylaws hanging on its side hints at its former past as Britain’s smallest police station. Big enough for just one man to stand in, it’s though the box was installed in 1926 by Scotland Yard to enable an officer to keep an eye on the protesters that frequently (and still do) met there. 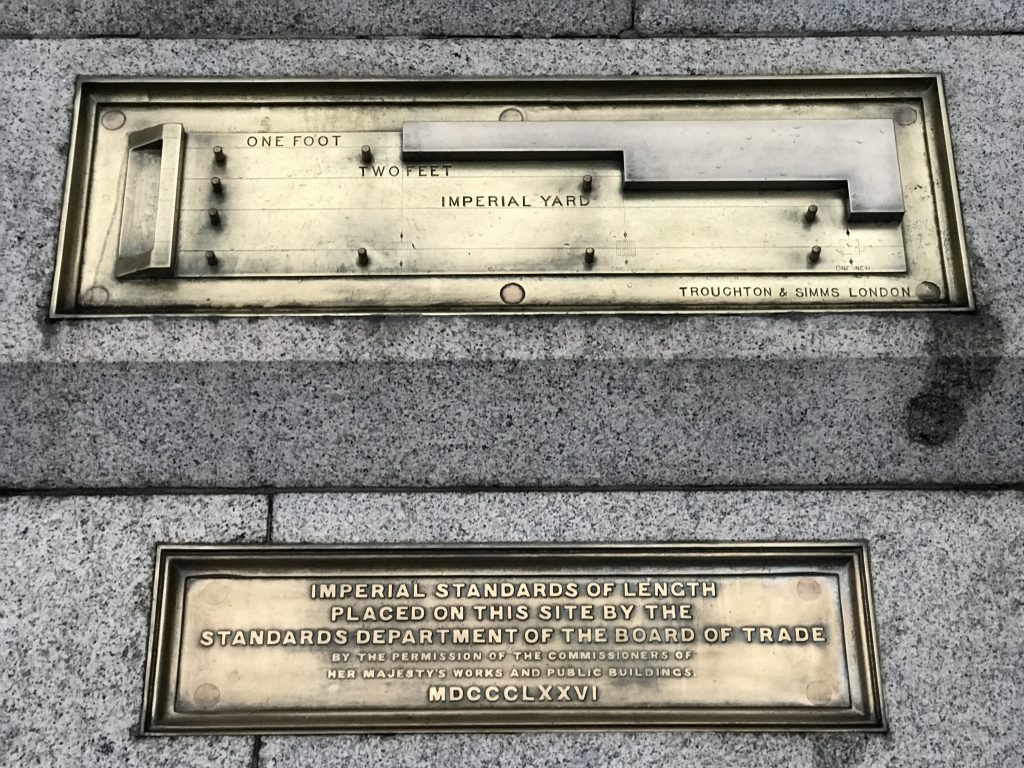 To the right of the entrace to the cafe on Trafalgar Square you’ll find a number of heavy brass plaques in the wall. Installed by the Board of Trade in 1876 they are replicas of the standard imperial lengths of 1 inch, 1 foot, 2 foot and 1 yard at the standard temperature of 67 Fahrenheit. The originals are at the Royal Observatory in Greenwich.

Giro – The Grave of a Nazi Dog 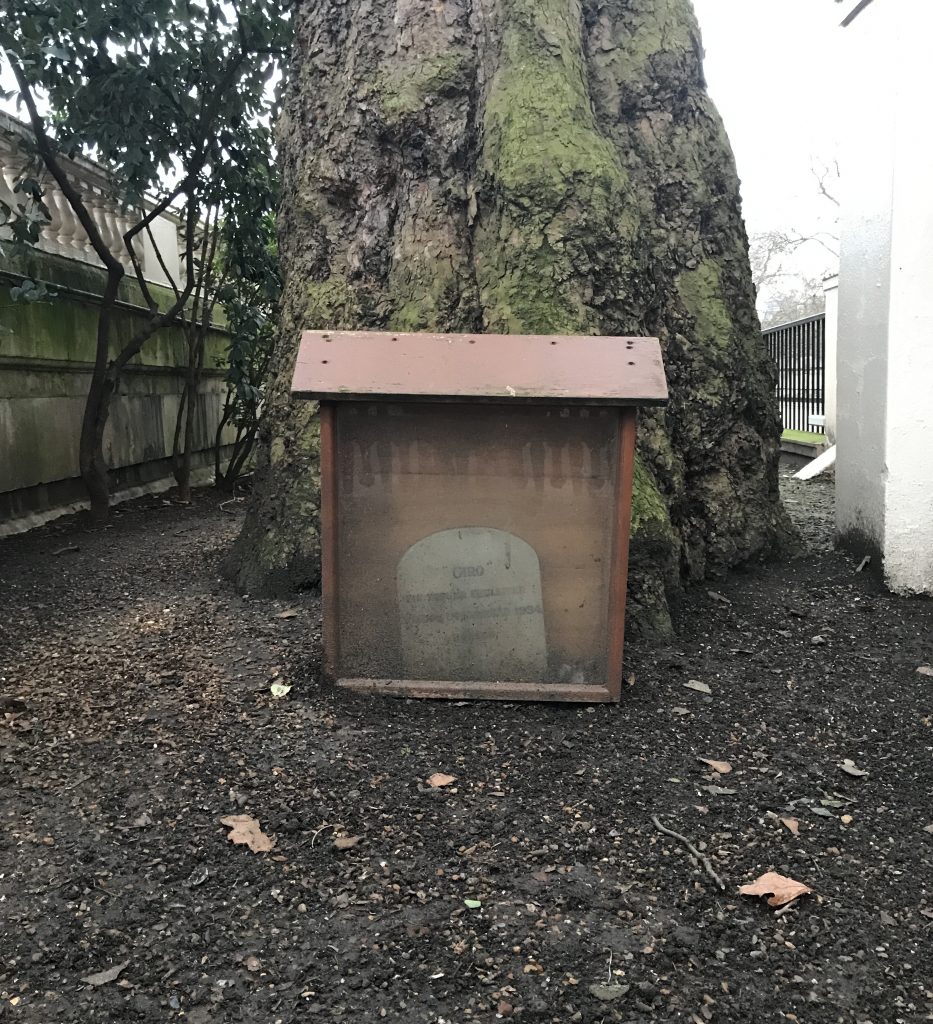 At the foot of the tree on Waterloo Place between the top of the Duke of York Steps and the entrance to the car park bellow the John Nash designed Carlton House Terrace (on the former site of the Prince Regent’s palace) is a small gravestone in a wood and Perspex box. The English translation of the German inscription is ‘Giro, a true companion’. Buried in February 1934, Giro was the much-loved Alsatian of the German Ambassador Leopold von Hoesch. The grave is situated in what used to be part of the garden of the German Ambassador’s residence at No 9 Carlton House Terrace. Legend has it Giro had a full Nazi funeral, but this seems unlikely as Hoesch was opposed to Hitler. On a side note, when Ribbentrop became ambassador in 1936 Hitler sent his favourite architect Albert Speer to re design the building, including the incorporation of a marble staircase donated by Mussolini, it’s believed that the staircase is still in the building.

The Duke of Wellingtons Mounting Step 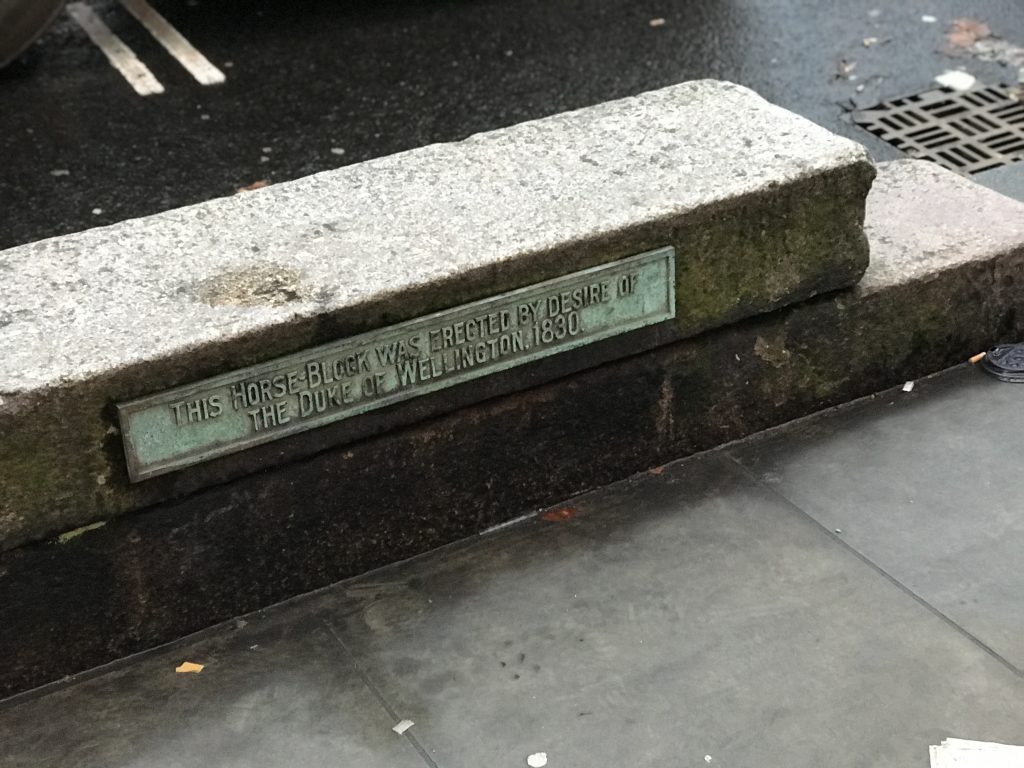 Just outside the entrance to the Athenaeum Club is a wonky rectangular stone baring a large bronze plaque. The plaque states that this mounting step was erected in 1830 on the orders of the Duke of Wellington so he could more easily mount his horse. 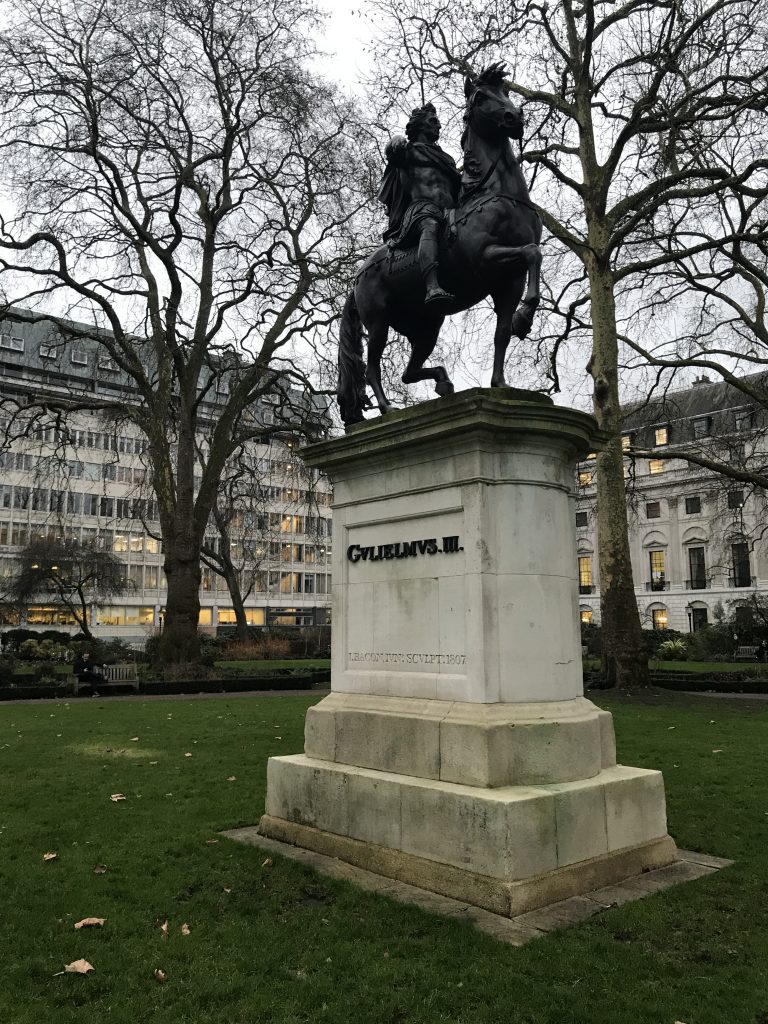 One of the main historic squares of London today it’s buildings house a number of Gentlemen’s Clubs, The London Library, an Embassy, the head quarters of two large multinationals and Chatham House the origin of Chatham House Rules. The Gardens are open daily and provide a haven in the middle of the city. In the summer you’ll find many of the local workers sitting having lunch on the grass and there are frequent statue exhibitions along side the statue of William III on horseback. From time to time there are even performances of Shakespeare. It’s maintained by the St James’s Square Trust, which was established by the Saint James’ Square: Rates Act of 1726, which allowed the freeholders on the Square to raise money among themselves to “clean, adorn and beautify” it. This was the earliest statute passed to regulate a London square, and is the only one still in unamended operation. 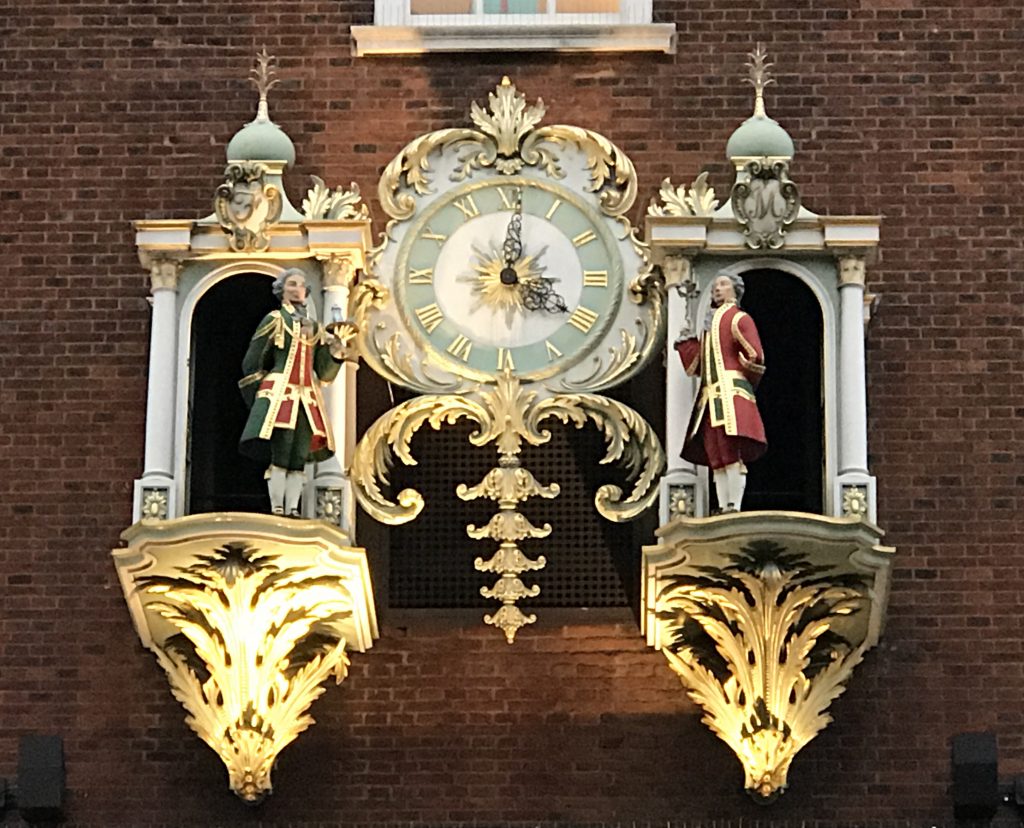 Above the entrance to the Queen’s grocer and world famous store is a four-ton ornate clock. Installed in 1964 it plays an 18th century tune every 15 minutes. On the hour two four-foot tall figures appear, the figures are the two founders Mr Mason and Mr Fortnum. Mr Fortnum carries a candle representing the candle wax that the store initially sold and built its financial success on. Fortnum was a footman to Queen Anne, one of the perks of the job was being able to take the used candles as the Royal Family insisted on new candles daily. Fortnum went into partnership with his landlord Mr Mason to sell the leftover candle wax, an expensive commodity at the time.

The Original London Red Telephone Box at the RA 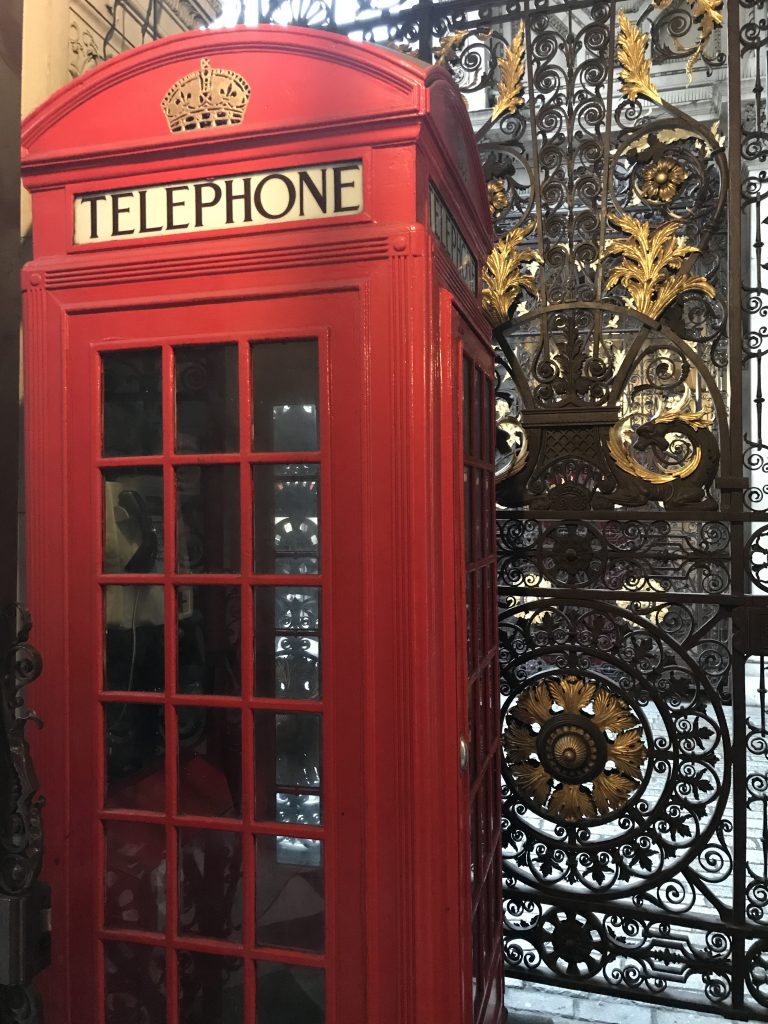 Just inside the gates to Burlington House, the home for the Royal Academy of Art, are two of the iconic red telephone boxes. Designed in 1926 by Sir Giles Gilbert Scott it is now a design icon even if most are filled with tourists, flyers for ‘ladies of the night’ and the stench of urine. These two boxes are some of the earliest kiosks and are the smallest listed buildings in London.

The Republic of Texas & Pistols at Dawn on Pickering Place 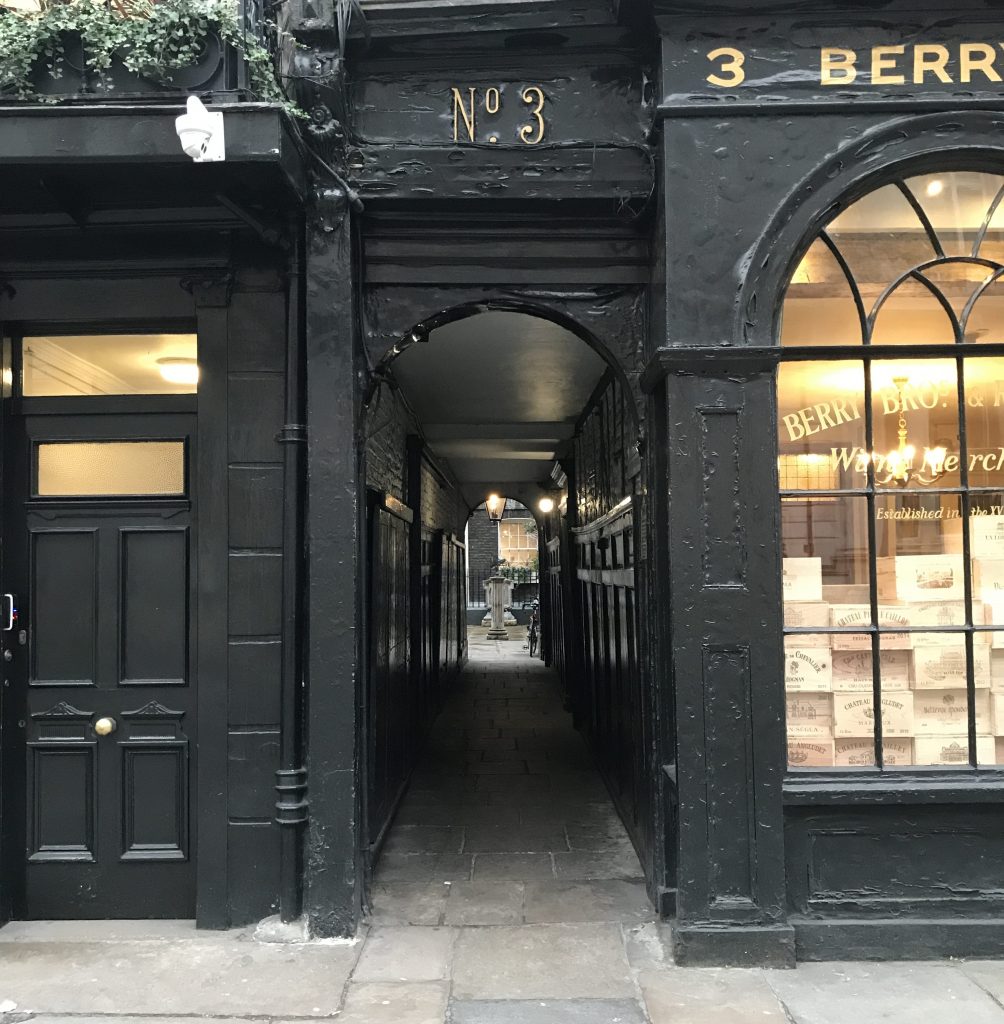 This tiny alleyway next to Berry Brothers & Rudd (founded in 1698 it’s Britain’s oldest wine merchant) leads to a Georgian cul-de-sac. Bellow the courtyard are parts of the cellars of BBR where Napoleon III hid, and the tunnels and secret passages that run throughout the area of St James’s that were used by royals and gentry to move clandestinely between the gambling dens and the whore houses that were in the area in the Georgian times. The courtyard is said to be the site of the last duel in England. Pickering Place was also home to the diplomatic offices of The Republic of Texas until it joined the Union in 1845. 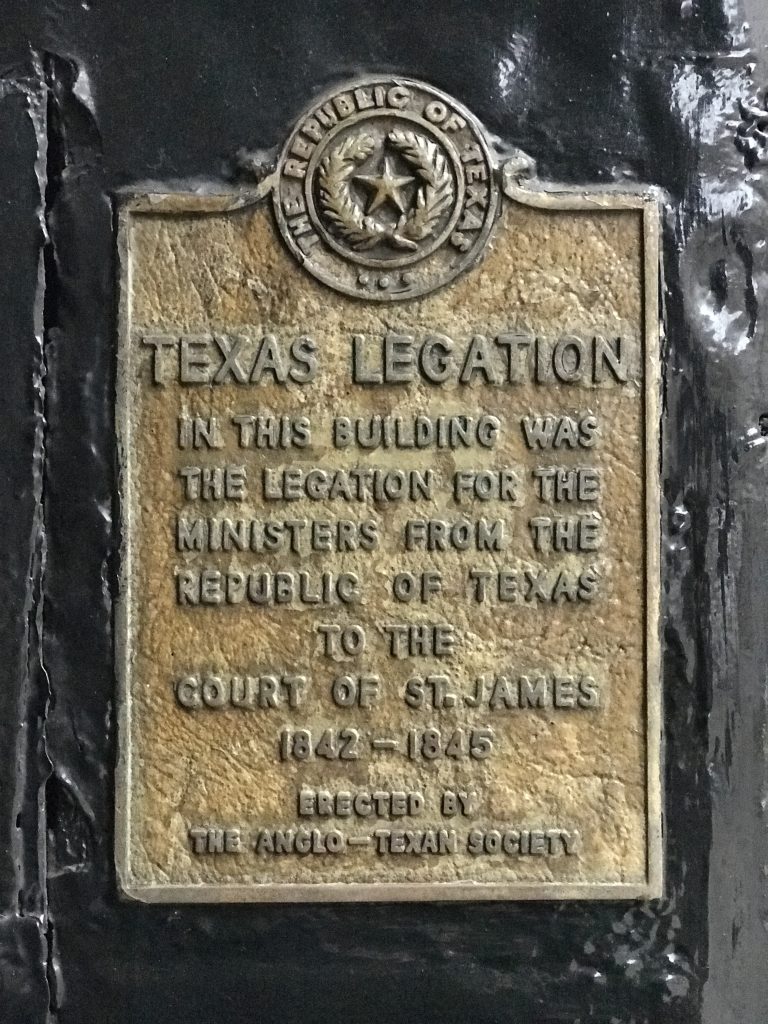 Duck Island Cottage and the Pelicans of St James’s 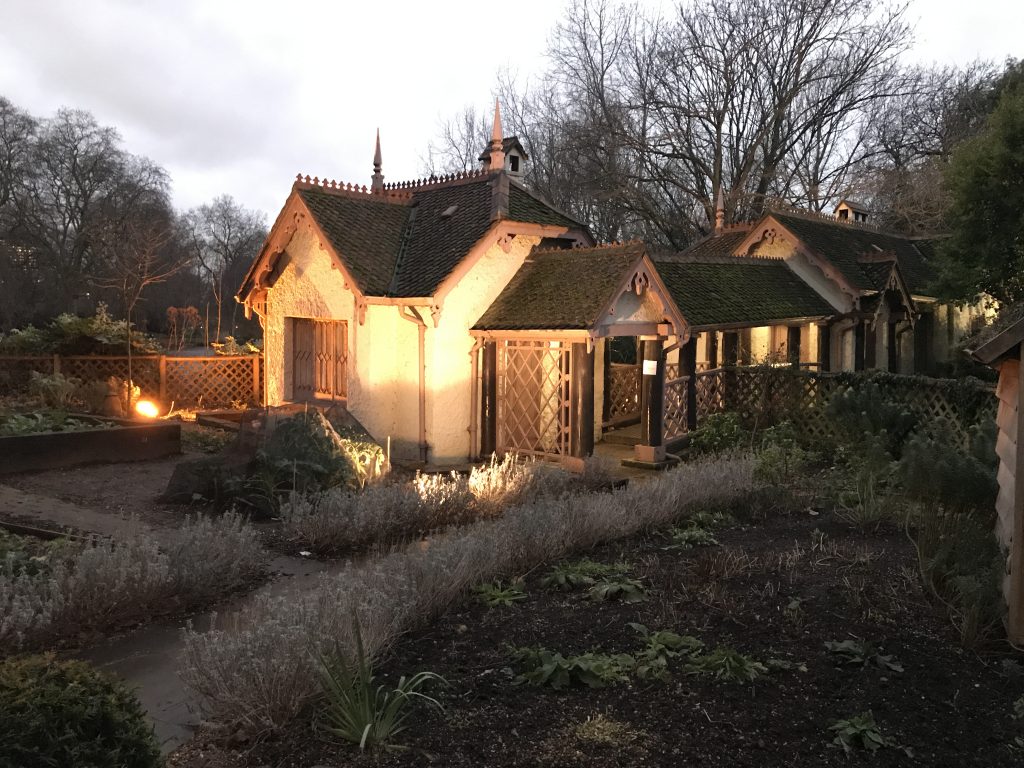 Duck Island dates from the time when St James’s Park as a hunting park. Charles II created the post of  ‘Governor of Duck Island’ leading William III to build the first lodge. Destroyed in 1771, it was rebuilt after 1840, as a chocolate-box cottage. In 1953 it was nearly demolished but was saved by the Royal Fine Art Commission and preserved as a keeper’s cottage. Its gardens are open to the public. Next to the cottage you’ll find the Pelicans of St James’s Park. First introduced to the park in 1664 when they were a gift from the Russian Ambassador, there have been Pelicans ever since. The pelicans are free to roam the area and are fed between 2.30pm and 3pm daily. One rascally pelican apparently used to fly over to London Zoo in The Regent’s Park to steal fish for its lunch.