A self-proclaimed ‘grotty rundown pub by the sea’ is by far the last place you expect to find a Michelin stared restaurant where Friday and Saturday lunch is usually booked up weeks, if not months, in advance. Sandwiched, as The Sportsman is, between the road and the north Kent coast just outside Whitstable, with its conservatory that floods in bad weather, one’s not full of hope for what’s inside – even if it has held its star since 2008, and has just had a cookbook published by Phaidon.

Once across the threshold of The Sportsman, hopes are only mildly raised. While the pub is light and airy with sanded down bar top and tables, and the regularly changing menu is on chalkboards, just as with any gastro pub, the paint is faded and old and the backroom is a 1950s extension with a dated brick fire place, wiring under cheap plastic covers and a grotty looking dart board. Meanwhile, the less said about the design scheme of the toilets the better. In fact, the contrast between the look of the place compared to the food can best be summed up by two items juxtaposed against each other in the Men’s toilet: the expensive hand soap of a high quality establishment, with the condom machine of pubs of old; though in fairness the machine works unlike in most places (not that I made use of it, I hasten to add). 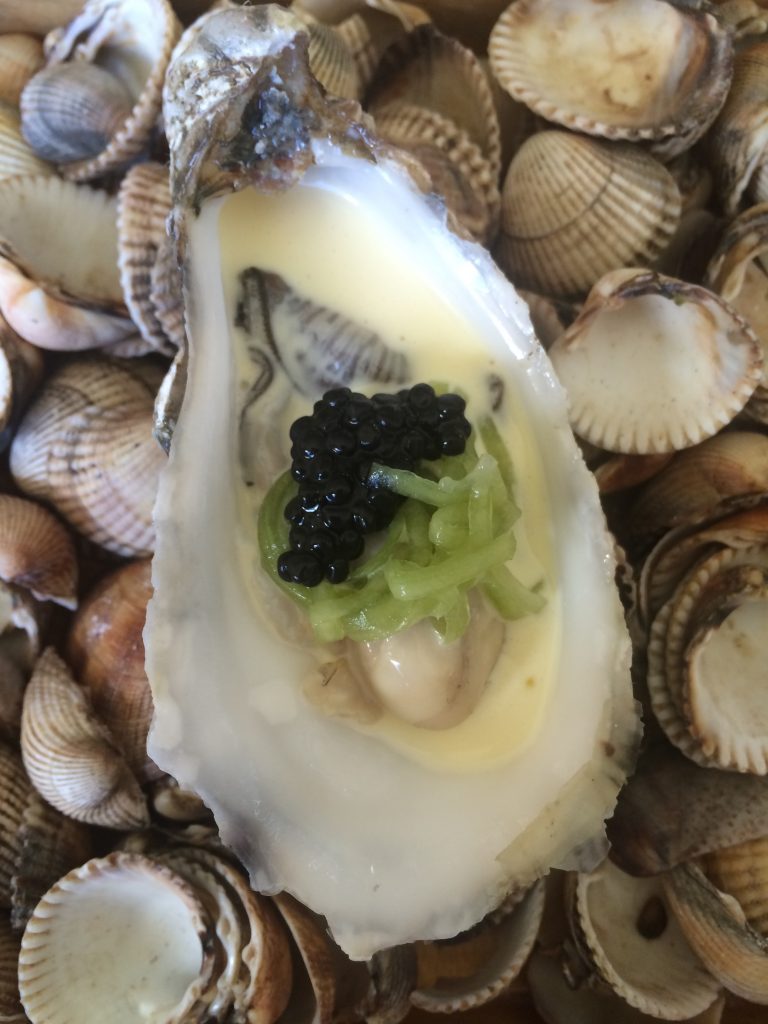 While this sounds uninspiring, don’t be fooled; it’s all part of the charm and success of The Sportsman, success that has brought it international renown and a dedicated global following. The menu reads well but, like the décor, gives no hint at what is actually to come from the kitchen. For it is unquestionably one of the finest meals you will have the pleasure of enjoying, being refined, homely, and creative, while taking advantage of the home-grown and local produce. It’s also amazing value for what you get. When deciding what to order you could go a la carte, but the five course daily tasting menu at £45pp is perfectly balanced and has the best of the a la carte on it.

From the moment the white foam in a broken eggshell in the form of an amuse bouche was put in front of us and we were told that it was a poached egg yolk with smoked eel, parsley puree, sherry vinegar cream and horseradish, I realised we were in for something special. The tastes were subtle and sublime and the eel some of the most tender and well flavoured I’ve eaten. 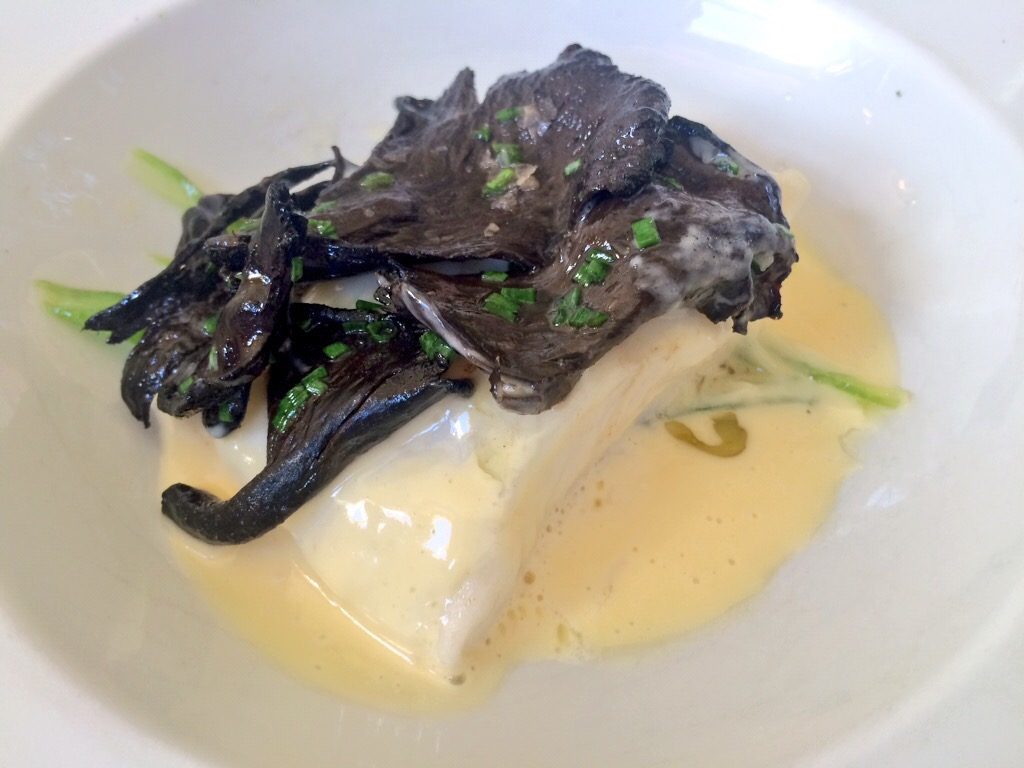 The poached oysters that followed were another step up. I love raw oysters but poached are equally delicious. You can do so much with them and every type of oyster has a different taste, allowing for different flavour pairings when they’re cooked. One of our pair of oysters was treated more traditionally, being served with a beurre blanc, pickled cucumber and caviar; poached perfectly it was a sublime. But the most interesting was the oyster topped with a crystallised seaweed and brambly apple granita, a perfect combination which went surprisingly well with a Bombay Sapphire and lime G&T.

The salt baked celeriac with apple and balsamic dressings, stewed apple and fresh cheese was a delicious lead into the main course. This was brill topped with fresh crab, accompanied by a crab sauce: traditional yet perfect with the sauce being beautifully silky smooth and unctuous. As ever when a crab sauce appears on a menu, it had to be substituted for my partner due to his intolerance to tomatoes. This is always a good test of the kitchen and the chef; it puts them on the spot and forces them to be creative. I can say that in this instance the resulting dish was a joy. The brill came with a sauce jeune and beautifully salty horn of plenty mushrooms, a dish that would sit on any of the best menus with deserved pride. I can only surmise that it wasn’t on the menu because it might be felt too similar to the beurre blanc served with the oyster. 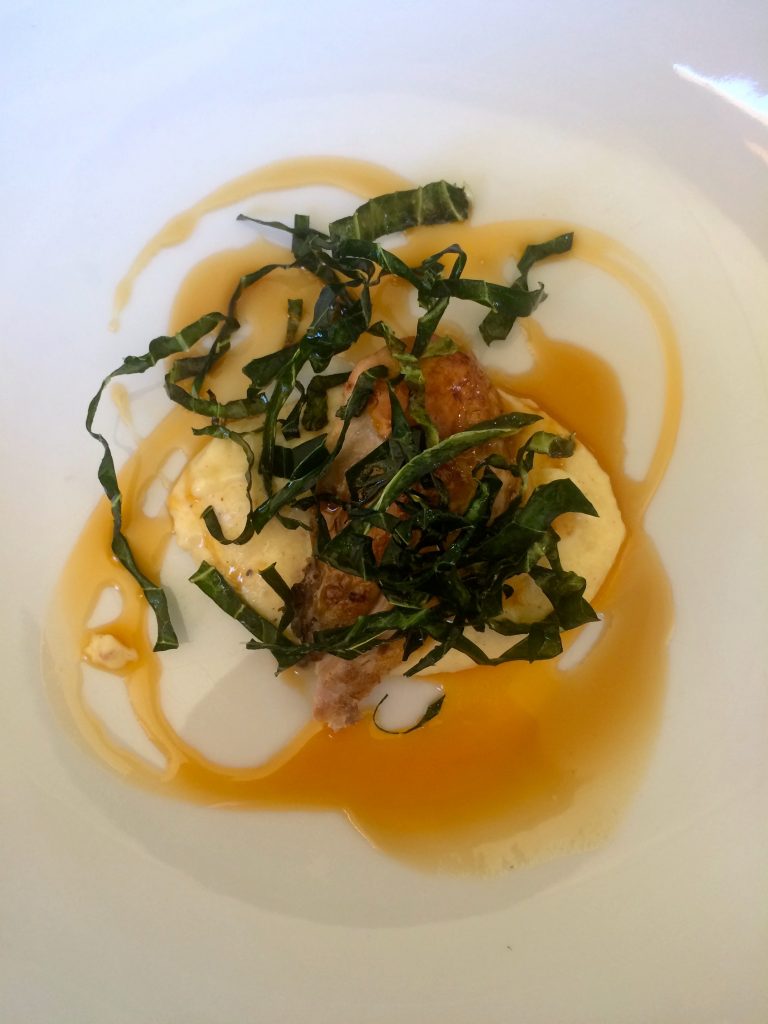 Partridge followed next with its bread sauce, crisp greens, cooking juice jus and rose hips, flavours that mingled together in harmony, and with a duck fat roasted potato, dressed with diced shallot, on the side. No doubt the bread sauce was made from homemade bread, and for good reason. The homemade bread brought to the table after the oysters with what I believe was homemade butter (I also believe that the salt was homemade – I was naughty and asked for some to go on my potato) – was truly superb: focaccia, treacle or maple syrup flavoured soda bread and sour dough.

Brilliantly inventive apple crumble ice-lollies were served as a palate cleanser before our choice of dessert from the day’s offerings. We each ordered the raspberry soufflé – made, I am sure, from the raspberries growing in the garden – and also asked for a portion of jasmine tea flavoured junket for us all to share. This was for research purposes only, I hasten to add, given its rarity on menus these days. The soufflé was immaculate, standing at least a full inch above the rim of its pot, while the junket was well flavoured and perfect for sharing; it was too large and rich for one. 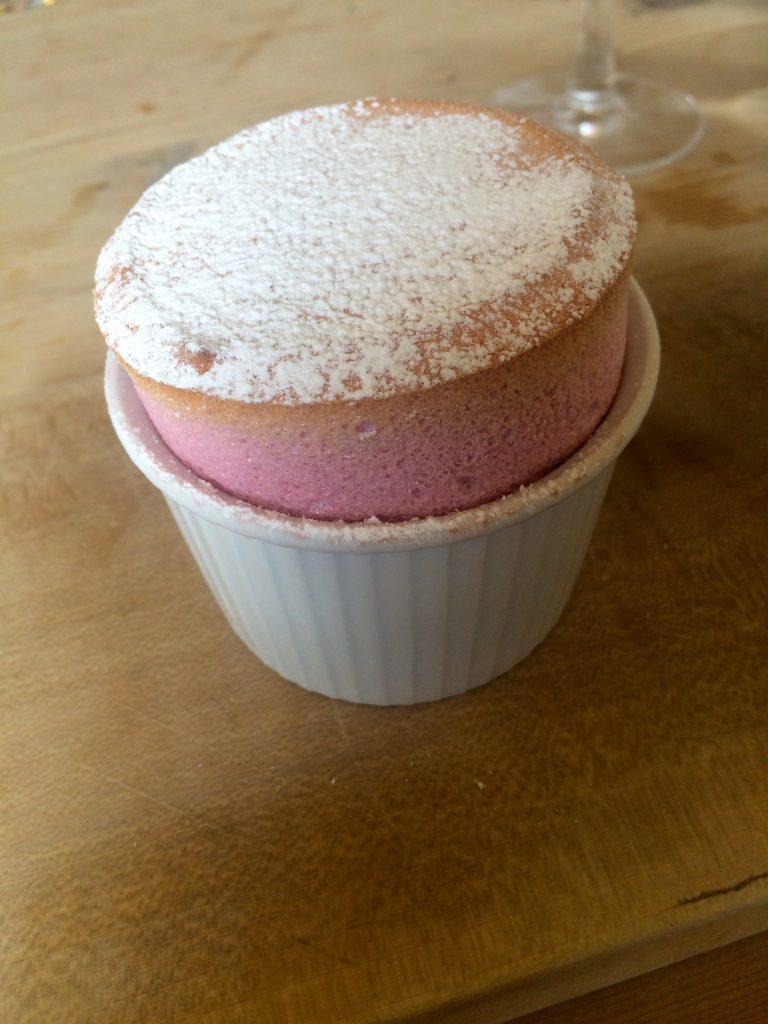 The meal was without fault and the service warm and friendly. One goes with the expectation of a superb gastro pub, an expectation that increasingly diminishes as one drives up to it and goes inside. But then the food arrives, and its not gastro pub food, it’s restaurant food and, rather than being at odds with the setting, it fits it perfectly and better than any starched table clothed and silver service starred restaurant in London could ever do. The only downside to The Sportsman is the time it takes to get to Whitstable. If you take the train so you can drink, it takes about two hours from central London, given the roundabout route it takes. That said, find a free Saturday lunchtime in 2 months time and book it; you wont be disappointed.

Perfect For – Celebration / Getting out of London / Lunch / Dinner