Trafalgar Square’s fourth plinth, originally intended for an equestrian statue of William IV, has become the leading public art installation in London. Started in 2005, the rotating commission has led the way in London’s pubic art commissions, to the point that the streets of our city are now awash with temporary and permanent art installations. London and our quality of experiencing the city are infinitely better for it.

Over the years, the plinth has seen nine commissions including the current one, with the tenth, set for a 2020 installation, already chosen. Anthony Gormley’s One & Other saw 2,400 people over 100 days each stand for an hour at a time on the plinth doing whatever they wanted. Nelson’s Ship in a Bottle by Yinka Shonibare, a replica of HMS Victory in a glass bottle and with sails made of African tribal prints, proved so popular it was bought for the nation and relocated to the National Maritime Museum in Greenwich.

What all the commissions have in common is a message or idea. Hans Haacke’s Gift Horse was a skeleton of a horse with a bow that worked as a digital screen. Showing the live ticker from the London Stock Exchange, it united the concepts of power, money and history, all things that London has represented through history. A more comical commission, of course, was the giant blue cockerel, by Katharina Fritch, supposed to symbolise regeneration, wakening and strength; some of us couldn’t help but see a giant French cock every time we looked at it.

The new commission, replacing David Shrigley’s big thumbs-up, is Michael Rakowitz’s The Invisible Enemy Should Not Exist. The sculpture is a replica of a lamassu (winged bull deity) from 700BC that was destroyed by Islamic State in 2015 along with other archaeological artefacts in the Mosul Museum. 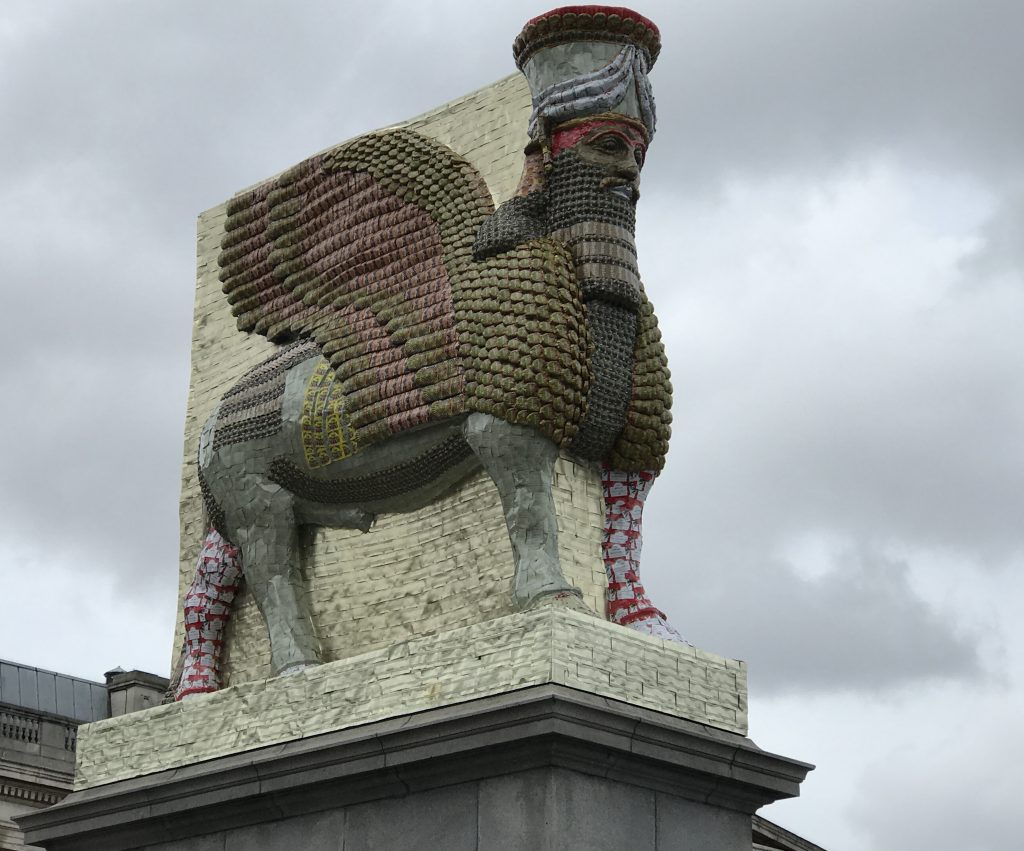 The lamassu on the fourth plinth is part of an intended series of 7,000 pieces that will collectively make up the work The Invisible Enemy Should Not Exist. Each of the 7,000 pieces that Rakowitz, an artist of Iraqi-American heritage, is trying to recreate is an archaeological item from Iraq’s rich history that has been destroyed or lost, first through looting in the wake of the 2003 invasion or subsequently destroyed by IS. The lamassu is the largest piece in the series.

Not made of stone, the sculpture is made from 10,500 Iraqi date-syrup cans of different brands. The date-syrup industry was a huge industry and employer in Iraq before the 2003 invasion but, like the original lamassu artefact recreated from its cans, the industry has been left in ruins, all but destroyed thanks to the turmoil caused since 2003.

The lamassu watches over and guards us as it did when an Assyrian deity, but reminds us of the wider impacts of war and their aftermath, and that the West is as much to blame for the loss of the date-syrup industry and the historic artefacts as IS is. We may not have destroyed the works and jobs directly but we unquestionably played a part in the loss of the industry, a loss that in part created a vacuum of work and opportunities where IS could flourish and then destroy the works.

Whether you choose to see this message, agree with it, or just think the construction from the cans is impressive, it is certainly a clever and beautiful looking sculpture that will change, adapt and no doubt prove popular over the next two years.