Right in the heartland of the North East’s capital, down a little ‘blink and you’ll miss it’ side street, it’s possible to find one of the most surprisingly unique chain restaurants out there. Opening in 2014, The Botanist is located just around the corner from Monument Metro Station, and quickly became the ‘talk of the toon’. Having heard great things about its sister venue in Manchester, The Alchemist, I had been looking forward to another high-end cocktail bar with a genuinely decent collection of cocktails to match. 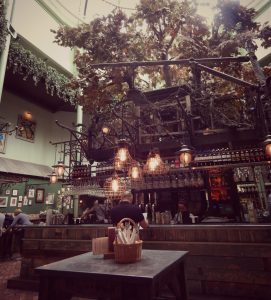 Taking an ‘industrial-style’ lift to the top floor of the former Monument Mall, I found myself opposite the bar, one of those cubic ‘yes it’s possible to get served from every direction, but never quite possible to catch the bartender’s attention’ ones that are becoming more and more common in the toon. What was particularly fascinating about this bar however, was the statement piece interior tree (fake), completed with miniature tree house built around it. When lit up on an evening, under the glass dome ceiling, it really is quite the spectacle, if not necessarily everyone’s cup of tea. Décor mostly falls into the ‘shabby-chic’ category but still manages to keep things fresh with the odd quirk to be found here and there.

The booze is GOOD, reasonably priced (though the craft beers are a tad high for my liking), and the cocktail menu is extensive – which can initially come across as a little overwhelming. This is mainly due to the fact that there are at least two versions of almost all well-known cocktails. For those staunch traditionalists that know what they like and like what they know, the sorts that appreciate the sacredness of the Old Fashioned, there are of course the classics. Then there are The Botanist twists, the unique botanical takes on those afore mentioned classics – for the hipsters amongst us that like a splash of peach and lavender in their martini or basil and plum in their caipirinha. If you’re in a group of 4-5 people why not opt for a pitcher of ‘Gin featuring strawberry and cucumber’, served in an actual vintage watering can. #Edgy

As a cocktail bar, The Botanist is a great place to meet up and hang out with friends, and the views of Grey Street from inside, combined with a commanding view of the Monument from the outside terrace provide a great ambience to enjoy all that ‘a night on the toon’ has to offer. Even the bar food is decent, I’d recommend the Salt and Pepper Onion Petals with crème fraiche (think posh onion rings that are twice as bad for you). 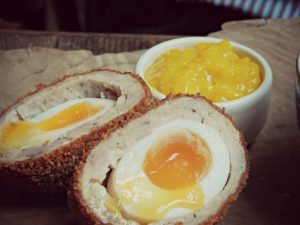 Unfortunately, it’s the rest of the food department that disappoints. The Botanist restaurant can make the place feel over crowed at times, and the main courses are pretty lacklustre – fish and chips, steak sandwich, half a chicken – the usual faire which, though very well presented, have been done better in several other Newcastle restaurants. The desserts are equally uninspired. If you must eat during your visit then go for The Botanist Deli Board, any four items from a selection of homemade favourites, cheese, hot pots, cold cuts and/or fish complete with Fougasse bread – for just under £11 it’s difficult to complain about, and I have to admit that the poached salmon fillet with lemon mayo was rather good.

As I mentioned above, all the food is well presented. Though this creates its own issues, with The Botanist seems to refuse the use of normal plates, staff (all disproportionately high scorers in both the Hipster and Physically Attractive League Tables) are forced to make a hundred trips back and forth to get the food to your table with out it all falling off onto the floor, and then made to repeat the whole sordid ordeal to take everything away at the end.

To summarise, if you’re looking for a friendly, atmospheric and ‘on trend’ bar to enjoy a few quirky drinks with friends then The Botanist might just be the place for you. If it’s food you’re after, there are better places out there.

Forever hopping between the bright lights of the city and the rural planes of Northernmost Yorkshire, Brian Hick is an admirer of fine food & drink, a player of videogames across all consoles, and a lover of all things automotive. He is a surveyor by trade.