Rough Spirits & High Society – The Culture of Drink by Ruth Ball is an absorbing look at the development of drinking culture in Britain over the past 500 years or so. Some elements will be more familiar than others, coffee houses and gin lane come to mind here, but Ball brings every element into the narrative with great skill so that it builds a fascinating picture that is heavily illustrated with images and documents from the British Library’s collection.

Rough Spirits & High Society opens with an introduction on alcohol and the rules surrounding it – who could drink and when – in ancient societies, including Greece and the Aztecs, a concept that would be hard to imagine today. This sets up the rest of the book and its focus on how drinking culture in Britain, particularly England, has developed over the last 500 years.

Drinking culture finds its roots in the rise of the tavern. As the numbers travelling on the road increased – traders, pilgrims etc. – thanks to increased peace and stability and more rigorous law enforcement, the old system of hospitality couldn’t manage. This system had seen the Lord of the Manor and monasteries play host to travellers, but the shear numbers of those on the road made the system untenable, so taverns grew up to service these travellers, providing a bed, food and drink. Unsurprisingly, this process sped up with the dissolution of the monasteries.

Taverns became the backbone of communities, indeed even the country. They served as meeting spaces and the foundation of postal services, including the Royal Mail. They acted as electioneering hubs, and often served as the venue for travelling assize courts, a key part of ensuring the King’s peace and keeping the nation peaceful and open for trade. This in turn meant more people on the roads fuelling the need for taverns.

Inns and taverns didn’t just serve beer and ale. Wine was popular thanks to it being the strongest thing you could drink before the invention and wider uptake of spirits in Britain.

The drinking clubs gained certain reputations, but were also places to network with others, sometimes in similar trades, other times according to social standing, while some would bring artists, academics and patrons together. This social networking allowed for the sharing and development of ideas and could be used to influence laws and economic development. In these clubs, you can see the gambling dens and then the gentlemen’s clubs that started to form in London during the mid/late Georgian to Victorian period. White’s, one of the most famous and traditional of gentlemen’s clubs, started out as a hot chocolate shop and a gambling den where courtiers spent time when not at court in St James’s Palace down the road.

While the inns and taverns were mostly for wealthy, alehouses were for the common man. Ale could be bought on credit for those short of funds; this would develop into the landlords providing money lending and pawn broking services. Some alehouses collaborated with large employers so that the workers were paid in tokens that could only be redeemed for drink and food at the affiliated alehouse. These were unpopular and were part of why regulation started to grow around the alehouses, including licensing.

What’s interesting given their popularity today is that spirits were slow to take on in England. This changed with William III (a gin lover, given his upbringing in the Dutch Netherlands) who increased tax on imported brandy and lowered and deregulated the production of grain based spirits in England where there was a surfeit of grain. At four times the strength of anything else and cheap, this fuelled the growth in the popularity of gin. It would become the drink of the poor, leading to fears of social breakdown and the famous Hogarth print ‘Gin Lane’.

It wasn’t just the alcoholic drinking dens that impacted Britain, coffee houses did too, and Ball is careful to spend time discussing this, and does so well. If you want to know more about the coffee house, though, you couldn’t do better than Brian Williams’ The Philosophy of Coffee, also published by The British Library.

The story of drinking in the main is a very male one, but it was the teahouse that provided a place for women to meet and have a cultural impact. Woman meeting at teahouses and discussing the issues of the day saw the beginning of the campaign for women’s suffrage, as they were able to talk and organise in a safe space.

Ruth Ball’s Rough Spirits & High Society – The Culture of Drink, is an engagingly written investigation of the development of drinking culture and its impact on society. Richly illustrated, it is a book that anyone with an interest in history, society or drink will find fascinating. 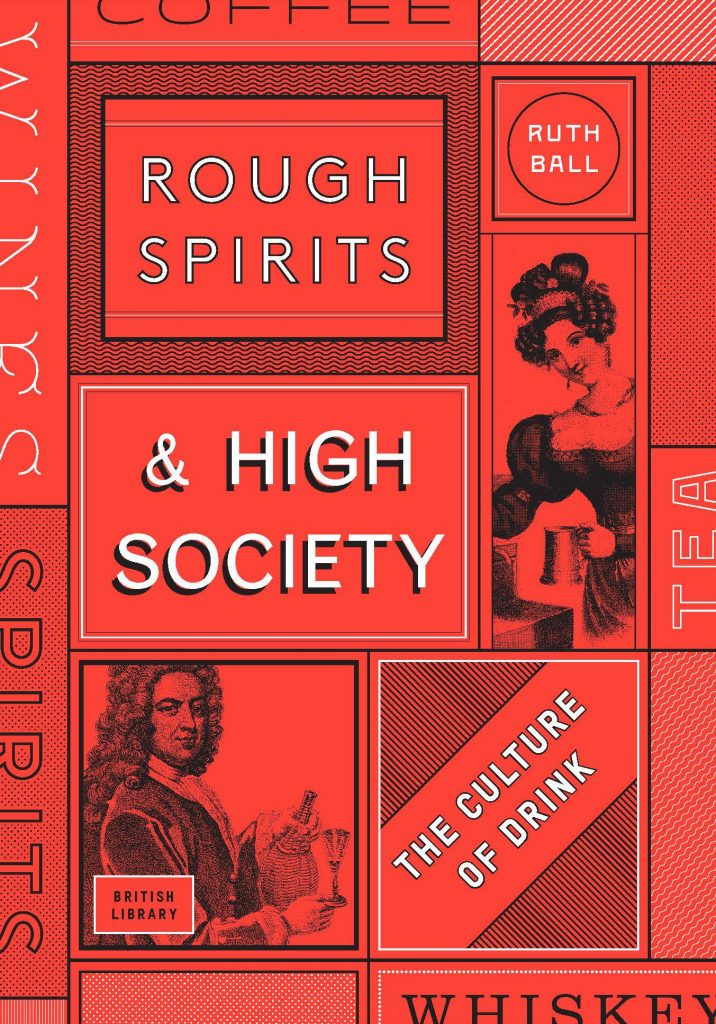