There are fewer more respected fish chefs in the UK than Nathan Outlaw; his flagship restaurant in Port Isaac, Cornwall, has just been named the best restaurant in the UK. So there is much to be expected from his London outpost, even if it carries just the one star, unlike the two of his flagship. My visit to The Capital Hotel was a while ago, before Port Isaac’s recent victory.

I have to say that, when I dined there, the menu when presented made one confused; this is a stared, smart restaurant but, with the lunch menu (and a good sounding menu with dishes you wish were on the main menu) printed down the side, it put me in mind of a bistro, gastro pub or high street restaurant. I was told that this was a change made a few months previously, but I’m pleased to tell you that this layout seems to have been replaced with a more traditional menu set up. The Bring Your Own Bottle offer of free corkage for the first bottle (£35 corkage there after) seems to be offered still on a Thursday at various times of the year. One can’t help but wonder if the restaurant is struggling a little. When I dined it was a Saturday evening and, unlike most restaurants of its ilk, it was no more than half full. Though, as I say, this is just speculation.

The amuse bouche of haddock fish balls were piping hot and lovely little things to start the meal, ahead of the arrival of my crab, orange and seaweed risotto. The risotto was very fine and delicate and thought very good by all in my party who had it, though I found the seaweed indistinguishable among the other flavours. 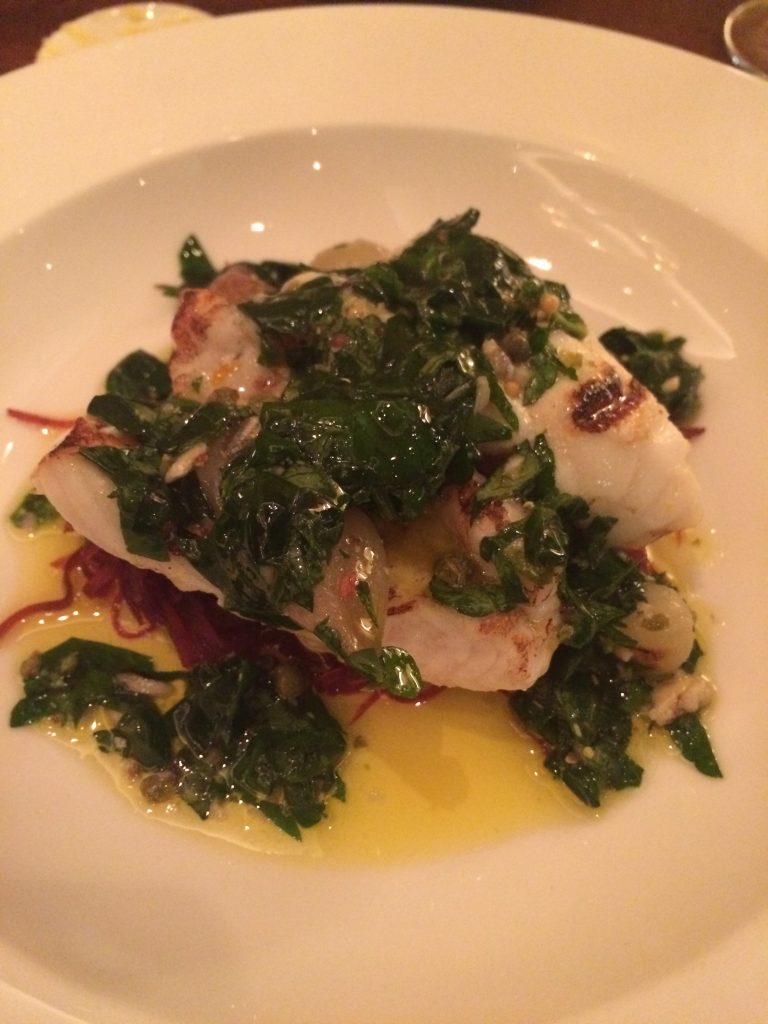 For my main I had ordered the cod with salami and fish sauce. Unfortunately this left me frankly quite underwhelmed. It looked overcooked and the salami contingent was just two thin slices; one expects rather more when it’s listed on the menu. Thankfully my father had meant to order it but mistakenly ordered the monkfish with beetroot and watercress sauce, so we played swap. All in all a nice dish but not perfect, this was much more to my taste, though it was a little overdone, I’d suggest, and the sauce was more like wilted watercress in olive oil than sauce as such. That said, the flavour of the pickled beetroot went perfectly with the fish and the watercress sauce.

As to the other dishes ordered – the cod and the breaded hake with asparagus, leeks and wild garlic – views were divided. The cod, as I feared, was overcooked and nothing special. The hake, however, was the star dish, with each component being perfectly cooked and working together in harmony.

At this point in the meal we took a break before dessert, and I’m afraid that it was the experience from here on in that sums up the evening in terms of the service and quality of the food, and really the general sense and feeling we had about the place and took with us. It is the same feeling I know others have had recently when they’ve dined there. 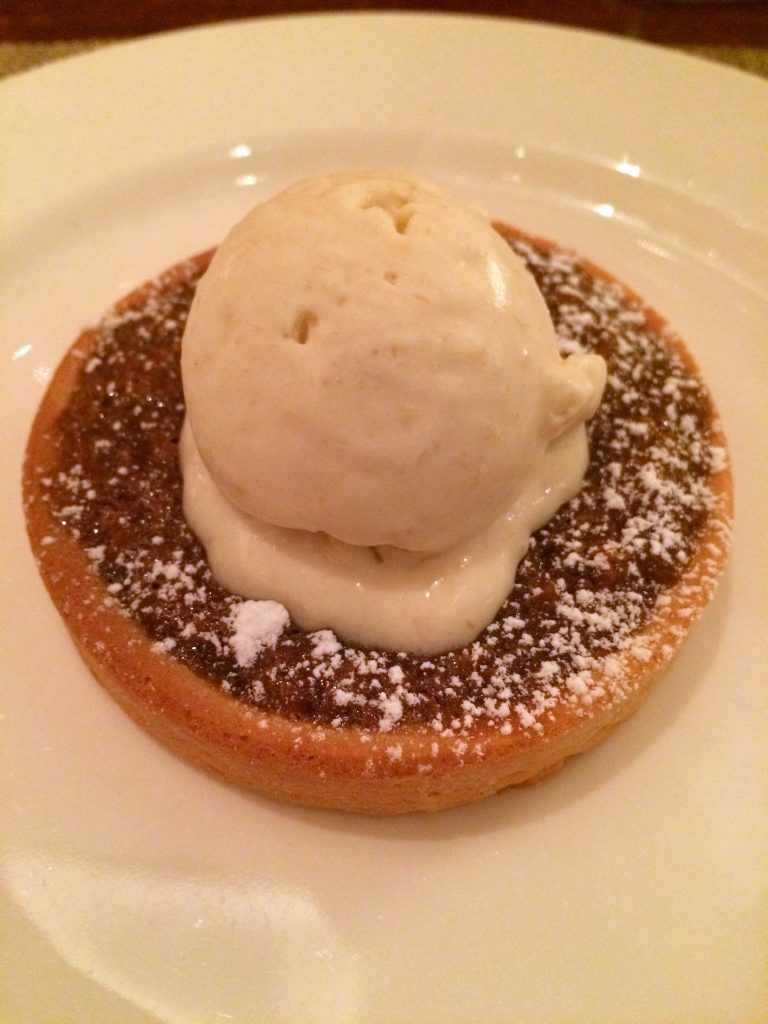 For dessert a number of us had pre-ordered the banana and treacle tart as we were warned that the dish took 20 minutes to prepare. Much later, when we had still not been served and were the only table left in the restaurant, we could see 5 of the tarts (we only wanted 3) sitting in the window of the kitchen, and they had been sitting there for some time. Then they were removed and, one imagines, simply reheated and served up to us, and not long after that more appeared in the window. The fact is, even if the tarts served to us were not what we could see in the window, they were certainly tasted precooked and reheated and deeply disappointing, with the pastry little better than what you get in a high street restaurant. Then the cheese ordered by the others in our party came with tomato chutney rather than the advertised fig and apple chutney. This was not good, as one of our number is allergic to tomato and the restaurant had been warned of this but failed to take it into account when serving the dish. The cheese itself was actually a very good portion so at least it had that going for it.

When it came to service, the staff were perfectly friendly but, one felt, not entirely on their game. At one point, one waiter tried to serve us another table’s bottle of red and it took three attempts to tell him it was the wrong bottle before he actually took note – thankfully just in time to right the bottle before liquid came from it.

The general view we all had was that the food was nice but not perfect, just as everything about the restaurant seemed to be. We were all left wondering how it had a star, given that we could each call to mind numerous one stars that are far better and should have two stars on the basis of Outlaw’s having one.

Perfect For – To be honest its hard to say.

Outlaw’s at The Capital Hotel