Fermented soybean paste? Sounds yummy! Well, OK, no it doesn’t, but call it miso, and suddenly it spirits your mind to that fragrant, mouth-watering, umami Japanese flavour loved by so many. Consumed in Japan for thousands of years, miso has been making an increased appearance in our diet in the UK as we seek out healthier options and new flavour profiles. At the forefront of miso’s expansion is Bonnie Chung, the founder of Miso Tasty, the UK’s first miso dedicated brand, selling a range of premium miso pastes and soups. Now the company has launched Miso Tasty: The Cookbook, comprising sixty recipes offering both innovative and traditional ways of using miso as well as how to integrate it into your diet more. 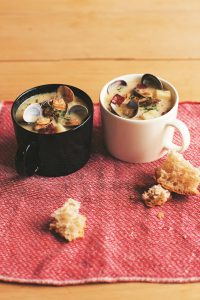 A cookbook, of course, needs good recipes, but a good cookbook will also teach you something. That’s what Chung strives to do, and she does it well, going into just enough detail to intrigue you and enable you to appreciate miso without leaving you swamped by complexity. To most of us in the West miso is miso, but it’s quickly evident that that’s just not the case. Chung elucidates on the different types of miso – produced according to how long it’s fermented, its salt content, and whether it uses white rice, soy beans or barley. While doing so, the social and regional history behind why different types exist is drawn out and, with a 2,500-year history behind them, these roles of miso can’t be underestimated. It’s been to the South Pole, kept samurai fighting fit whilst on campaign, and has supposed mystical healing powers. The production of this umami paste, like many old and time-consuming industries, has suffered from market forces and industrialisation, with many small-scale producers closing or being bought up by larger entities. At the same time, miso is being consumed less in Japan, as eating habits change with the ever-faster lives of those in the cities. Thankfully, not all is doom and gloom for the centuries-old industry; a newfound interest from many, both in Japan and internationally, is helping to sustain a truly vibrant and creative sector.

Of course, the point of the book is to show, via sixty recipes, how you can easily use miso in dishes to add a real depth of flavour, and an umami note. Helpfully for the novice status of most readers, Chung provides us with a brief introduction to the mindset of a Japanese cook – as opposed to the French or other Western cook – supported by five key tips on how to use the paste properly. And still, for the more adventurous, there are instructions on how to make your own white miso.

The recipes are divided according to how the miso is used – soups, spreads and dips, dressings and sauces, marinades and pickles, desserts and sweets. The first recipe is for the miso dish we all know, miso soup, which is served at many meals in Japan, even as breakfast and, like miso itself, has a topping which varies according to region. It’s one soup and noodle broth after another, and you’ll want to try them all. How one can resist the idea of a hot bowl of wild mushroom and barley miso soup, miso clam chowder, or Sapporo miso ramen, I don’t know, and, for those wanting to become sumo wrestlers, there’s a recipe for chanko nabe (the sumo wrestler’s hotpot). Each of these recipes is a version of a traditional Japanese dish and should pose no problem for any home cook. 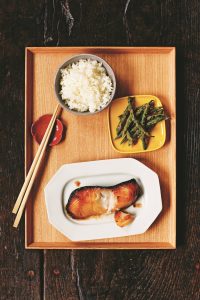 The different spreads and dips will certainly be a welcome section for those who are after something different to the ubiquitous hummus or guacamole. Personally, I was rather taken by the idea of the miso chive butter to rub on corn on the cob. The dressings and sauce section has some great ideas; I even tried the recipe for creamy tahini miso slaw at a party for fifty that I catered recently. An alternative to the slaw I originally had on the menu, it went down a storm. I’ll certainly be trying the braised miso and ginger pork ribs with a sticky plum sauce, and the idea of a miso hollandaise for your asparagus and poached egg is another I’m fascinated to try.

The run of mouth watering recipes carries on into the marinades and pickles section. Here the black cod, whole roasted cauliflower, grilled mackerel, roast duck, and slow braised pork belly are sure to have you drooling. The desserts all look and sound amazing, though it will be a brave step for anyone to put miso in a dessert for the first time. Then again, why not? If the book works its magic, it’s a step I can well believe one would take with confidence.

This book is a beautiful little thing with a driving idea and hope. The photography by Yuki Sugiura is stunning and goes a long way to enabling it to achieve all that it does. Importantly, it’s fascinating and makes you want to use it, and stock up on miso. Bonnie Chung has unquestionably achieved what she set out to do. I shall be using her book constantly.