As the summer is finally about to take its hold over the Northern Hemisphere, thoughts frequently turn to places that boasts an abundance of sunshine and are preferably known for their wonderful beaches. For those of us in the UK this might lead to a nice sunny spot in Spain, a village close to the sea somewhere in Italy, or a rustic delight of southern France. Some of us will even be adventurous enough to go as far afield as Turkey, Greece, California, or an island resort in the Indian or Pacific oceans.

For some, including this author, a city break or two will help bridge the gap between the onset of summer and their long-awaited holiday in August. This is an entirely different kind of holiday: no seaside delights of long, lazy lunches in the sun followed by equally long naps. However, one gets to see Paris, Rome, Milan, maybe even Berlin, Stockholm or Budapest, and enjoy these cities and all they can offer in the full swing of summer.

And yet, having done a few of these trips in the past, short visits out of London to another bustling (if smaller scale) European metropolis somehow stopped feeling like a break from the mundane and tedious. At some stage it stopped feeling like a journey of discovery and turned into a multi-language challenge of rushing around in a semi-familiar setting and trying to order a small caffeinated beverage from the local branch of a global coffee shop chain.

One almost gives up on the idea of finding a quaint corner of Europe that is within an easy commute of Central London and offers all the comforts and novelties required to take one’s mind off things at work and help see how the mundane fits into the bigger picture. Enter (stage left) Lisbon.

Over the past few years the Portuguese capital has often provided me with much needed respite from the often-grey skies of London. Lisbon is steeped in history, having been the centre of, and benefitted from the riches of, the Portuguese empire. Flattened by an earthquake in 1755, the Portuguese have fully rebuilt their capital city along the grid layout. Thankfully, independent creativity took over thereafter and introduced some pleasant curvature to the street pattern of the Chiado and Bairro Alto areas. 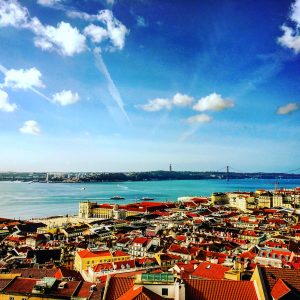 Overall, Lisbon is great to explore: its castle, the Commerce square, the monastery of Belem and the old royal docks where the Portuguese explorers set sail to the Indies unleashing the Age of Discovery in the 15th Century. All of these provide an interesting insight into the history of Europeans discovering the wider world after the darkness of the Middle Age. A history that we in the UK tend to glance over and often skip in favour of the adventures of Francis Drake and colonisation of India.

The scent of history is everywhere in Lisbon, but mainly it is its way of life, and its tempo, that leaves an unforgettable mark on every visitor. After relinquishing its empire, first by letting Brazil go in 1822 and then by withdrawing from its African colonies in the 1970s, Lisbon has stepped into the backbenches of world politics with grace and style.

Today visitors to this notable city walk through the marble landmarks of its illustrious past, its churches, convents, palaces and squares with great sea vistas. They also quickly warm to the old-fashioned clunking of its ancient wood-panelled trams, its shops that close down for a mandatory long lunch break, its bars serving local beer in ridiculously small, yet endearing glasses and even the shop selling various household wares styled by the famous Portuguese brands of the past.

All these reveal a city that is at ease with itself, its past and its place in the world: a grand dame of Europe enjoying its quiet retirement by the sunny Atlantic.

This is not to say that Lisbon lacks dynamism. However, it embraces it with its own peculiar charm. A good number of new bars have sprung up in recent years, including Pensão Amor on Rua do Alecrim and the rooftop terrace of the Bairro Alto hotel. A night out in Lisbon is nothing without an enjoyable apperetivo shared with a group of friends outside a bar in one of the winding streets to the north of Praça Luiz de Camões.

The food scene has also evolved and produced some solid spots like 100 Maneiras by Ljubomir Stanisic (the suckling pig will beat anything that is on offer in that notorious pork dish country, Spain) and a fine dining experience of Belcanto by José Avillez.

My favourite, however is Cafe Lisboa, also by Avillez. Set inside the welcoming art deco-styled wing of the National Theatre of Saint Carlos, this restaurant is ideal for a leisurely lunch or a theatre night dinner. On warm days a lunch on its terrace accompanied by the signature steak and chips with mushroom sauce and some excellent wines from the Dão and Lisbon regions is a must.

The National Theatre itself deserves a special mention. This beautifully restored eighteenth-century work of beauty today irregularly hosts opera, ballet and classical music concerts. Watching a performance there, either in its main hall or its smaller Salão Nobre, followed by an elegant dinner, will go a long way in opening the soul of Lisbon to any traveller.

The old charms of Lisbon and its take on modernity make it a welcome haven in Europe and the place to go, and then keep going back to, for a relaxing short break. You’ll find a city that has lived through its share of ups and downs and is in no rush to embrace a new fleeting trend, but rather moves graciously and slowly to ensure it keeps up with the times. Just about.

Written by The City Breaker

The City Breaker, is constantly flying for work, but despite this he loves travel as a way to relax and escape with his partner. From time to time He'll be sharing with us his favorite places to escape the rat race to.