When discussing Korean food with your peers, your mileage is likely to vary. South Korea itself is seldom at the top of the gap year travel list and is more likely known as the birthplace of Samsung and LG. Few will link Korea with its food, but those who do will likely do so with relish.

This article is a quick guide to some of the more basic dishes available and will hopefully give you the confidence to dive headfirst into a Korean restaurant in central London (of which there are many).

The Korean’s have some of the most delicious and (by their own account) healthy food that you’re liable to find. Meat and vegetables will feature heavily, whereas carbohydrates and thick sauces are rare. Hot sauces and spices are commonplace, although in the west at least, not overpowering. Coupled with a range of spirits and beers, which would be difficult to find elsewhere. A meal at a Korean restaurant, while recognisably Asian in origin, is a unique experience.

Dishes vary greatly from western friendly soups, rice and BBQ to the more exotic, such as San-nakji, a raw dish made with long arm octopus, whose arms still writhe on the plate while you eat them.

It would be remiss to talk about Korean cuisine without tackling Kimchi first. The chief accompaniment of most traditional Korean meals, Kimchi is a cold dish made of seasoned vegetables and packed with healthy goodness. In the UK it is normally fermented cabbage with a mixture of herbs and a hit of spiciness. Kimchi is so common within Korea, that Koreans say “Kimchi” rather than “cheese” when taking a picture.

Kimchi is very much an acquired taste, with most of my friends recoiling at first, before coming around to it during the meal (normally after a few shots of Soju).  For those that find the taste overpowering, it is entirely acceptable to cook it on the BBQ, which will lessen the kick. While some restaurants in London will bring it to you whether you want it or not, it is well worth adding onto the bill if they don’t.

Bibimbap, normally eaten for lunch – but also as a simple dinner, is a bowl of warm rice accompanied with sautéed and seasoned vegetables and lashing of gochujang (chili pepper paste). Meats and fish are also commonplace additions, ranging from beef to squid. In some restaurants, where hot stone bowls are used to serve the meal, the waiter may crack a raw egg into the rice – resulting in egg fried rice being cooked in front of you. There is very little that isn’t familiar with this dish for the average Londonite and is something I would recommend as a good starting point. There are a number of Bibimbap places that cater to the office crowd in and around central London. 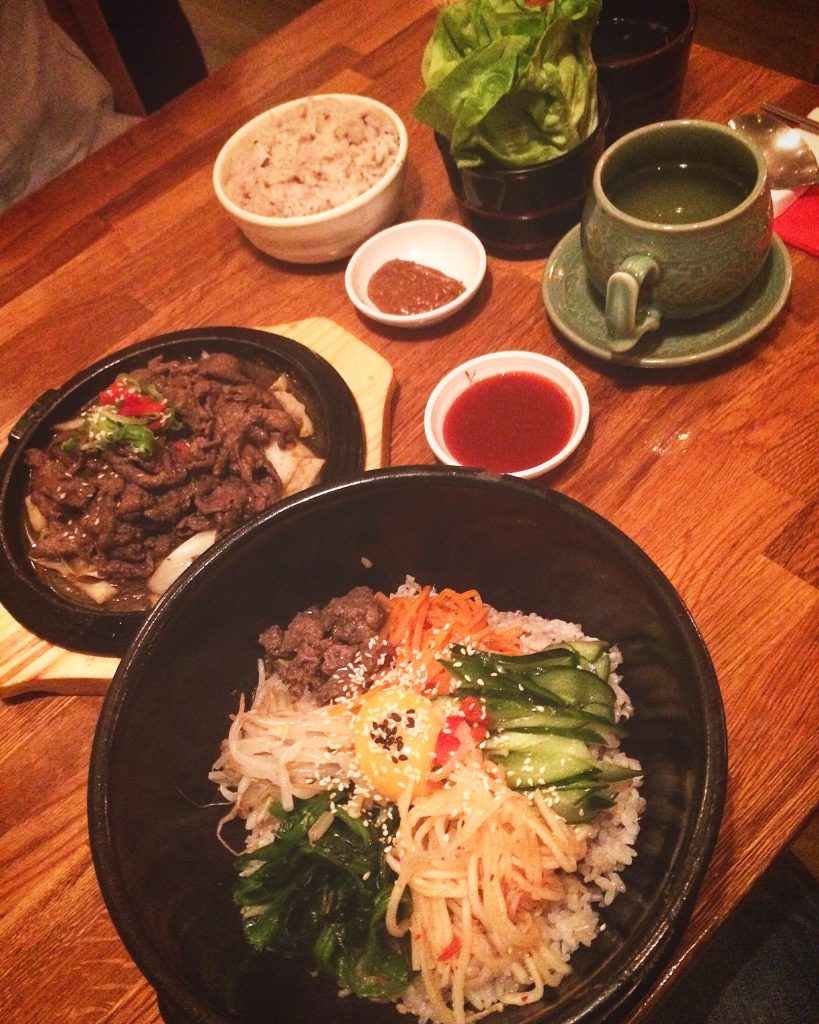 Finally, Korean BBQ is probably the most popular aspect of the Korean dining experience in the west – and most Korean restaurants will offer this. The cooking plate will be either mounted in the table itself, or on a portable camping stove. Either way, the process of cooking the thinly cut meat on the table is always impressive.

There is a range of options including Samgyeopsal (thick slices of belly pork), Bulgogi (marinated beef) as well as chickens, squids and vegetables. If there is a option to buy a range of these I would highly recommend it. The preparation of meats is something that marks Korean BBQ apart, leaving a unique taste in what is otherwise undressed meat.

Once cooked the meat is portioned out and fused with a combination of sauces and side dishes. To eat, the meat is placed within a lettuce leaf and eaten in one go. The different meat and side dish combinations mean that while you’re basically eating meat and vegetables, there is a whole range of favour combinations to create to excite you and suit your own taste.

One must (in this writer’s opinion) pair a good Korean BBQ with Korean beer (any) and lashings of soju. For the uninitiated, soju is a vodka like drink that sits around 20% ABV, putting it somewhere between a spirit and a wine. This causes an issue for the average Londonite, as the fragrant tasting drink when drunk as a shot alongside beer quickly catches up on you.  As a social drink Soju should never be poured yourself, but by your neighbour! Additionally, it is particularly bad form to leave your neighbours glass empty. It puts rules regarding port into perspective.

So there you have it, a quick jaunt through what might be your first look at Korean food. We’ve not covered a whole host of foods, including KFC (Korean Fried Chicken) – which demands its own article almost, but it’s something different from what you would expect to eat on a night out, but very very good and well worth a try if you haven’t.

Where to try Korean:

So where can you go to get a decent Korean in London? You’re generally talking about Soho for the plush but expensive or New Malden aka Little Korea for a cheaper and more authentic experience. Like any national cuisine you’ll find individual restaurants take on it differ, ranging from Jinjuu which is a very much up market affair to Arang which reminds me much more of the kind of restaurant you’ll find in central Seoul. BibimBap, is superb for (as the name rather suggest) bibimbap located in Soho, while for decent and well priced Korean BBQ and bibimbap you could head to Naru just round from The Shaftsbury Theatre.

Matthew has been living in London for at least 5 years now. A lover of gin, beer and Asian food he loves exploring London's restaurants with friends on a regular basis and traveling in the US and Asia.