The London underground is the worlds oldest subterranean transportation system moving some 4.8million people through its lines daily. Without it, London would grind to a halt; but it only manages to do its job thanks to the unwritten rules that have developed among Londoners. Suffice to say, if you break just one of these rules you will incur the silent wrath and indignation of your fellow commuters via glares that will cause you to blush and hang your head in shame, in a way only Londoners can do. So to save you from this terrible fate, London Lamppost have put together the 8 rules that you need to remember, to use the tube like a Londoner.

Get Your Ticket Out

If you take a moment to look, a great way to tell a frequent user of the Tube from those whose tube-use is in its infancy, is the way they approach the barrier. All Londoners that frequently use the tube get their ticket or oyster card out at least 10 metres before they reach the barrier. This allows vital seconds to be cut from the Londoners commute, if timed perfectly they wont even have to stop walking as the barrier will open just in time for them to walk through it without pausing. Fail to have your ticket out and you’ll cause a backlog of tutting Londoners coming up your rear and banging into you.

NEVER STOP WALKING in the middle of the concourse. Move off to the side, and if you’re walking slower than those around you, do so off to the side. There is almost nothing that is more calculated to set a Londoner off than someone suddenly stopping or slowing in front of them causing them to crash into the thoughtless individual or swerve round them into someone else. This is just a good rule for any public space in London especially the pavement.

Stand On The Right

JUST DO IT. Stand on the right. It’s not hard, there are signs everywhere telling you to and everyone else is doing it, do you think they do it for the hell of it? NO! It’s because those of us in a hurry trundle down the left side of the escalator at speed, so don’t get in our way.

Wait For Others To Get Off The Train

This is the most fundamental thing to do on the platform. When the train doors open, stand to the sides and let all those that need to get off, get off. Don’t barge your way on: just wait. If you push your way on I can guarantee you that you will be so disliked, you could be bleeding out and still none of your fellow travellers would come to your aid, seeing it as a just reward for elbowing your way on. Oh, and don’t stand in the middle of the doors as people flood off, you’ll only annoy them further than they already are and make the whole process slower for you and them.

Move Down The Carriage

Make use of the available space. Don’t be the one that stops people getting on the train and missing meetings just because you were too selfish to move and make room. Don’t worry you’ll be able to get off when you want, people will let you off. No tube leaves before everyone that wants to get off has and as many as possible have got on. 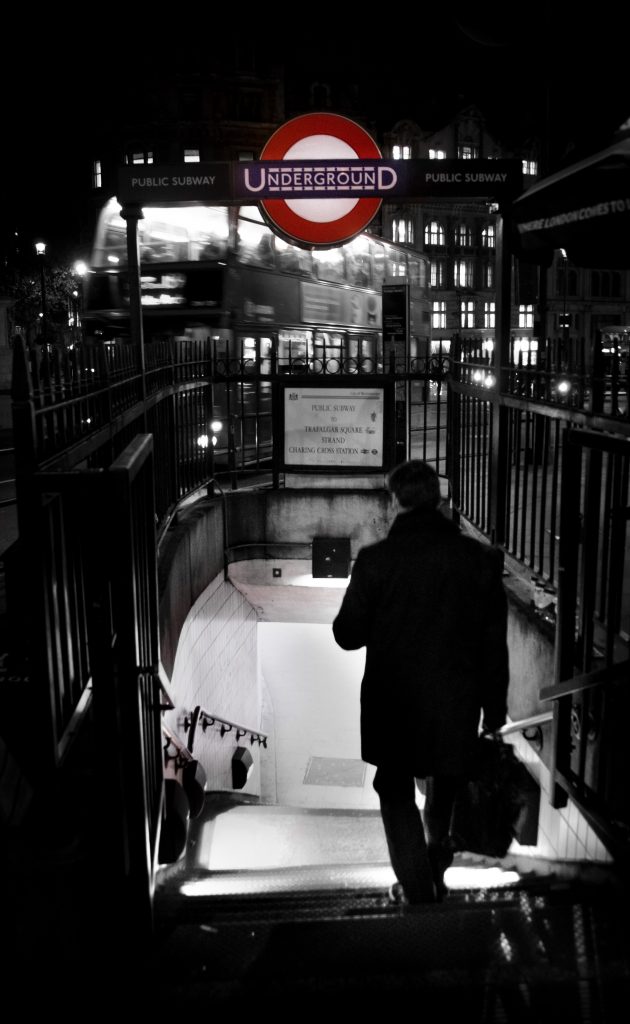 This goes for bicycles and pushchairs too. If you have big items and you don’t have to travel in rush hour, don’t. You’ll annoy others and have problems finding space, you’ll just end up hot sweaty and stressed.

Yep why talk when you can read a paper, book or your phone all the while listening to music? Oh and on the subject of music DON’T PLAY IT LOUDLY, no one could give a shit what you’re listening to let alone wants to hear it. Ah and also keep the eye contact to a minimum. If you must talk, do so just loud enough so that your interlocutor can hear you, but no more.

The most forgotten secret about the Underground is that at times it can be quicker to walk. Just because the stations look miles away on the tube map, it doesn’t mean they are in real life. A number of stations are just a few hundred metres away from each other. Covent Garden and Leicester Square are two perfect examples of this; they are closer together than the distance between the Jubilee Line and Waterloo and City Line platforms in Waterloo Station.