Duck and Waffle has been going for a while now and has been reviewed left, right and centre, but its often worth eating at a restaurant after the initial impetus that it launched on, as that’s when you get the real service, the service given as standard when not under a microscope. It’s also worth going at the non-peak times for the same reason. Service, of course, should be just as it is at peak times.

Unfortunately we were left feeling rather dissatisfied by our entire experience there. We arrived at the entrance on the ground floor looking forward to the late lunch I’d managed to secure at a week’s notice. However, our enthusiasm for the meal ahead didn’t last past this point as the two at the desk were rather dismissive of us, I think on the basis that we were not going to Sushi Samba, which would be slightly more understandable if the two restaurants weren’t owned by the same company. But this was nothing compared to what greeted us after our lift ride to the restaurant. 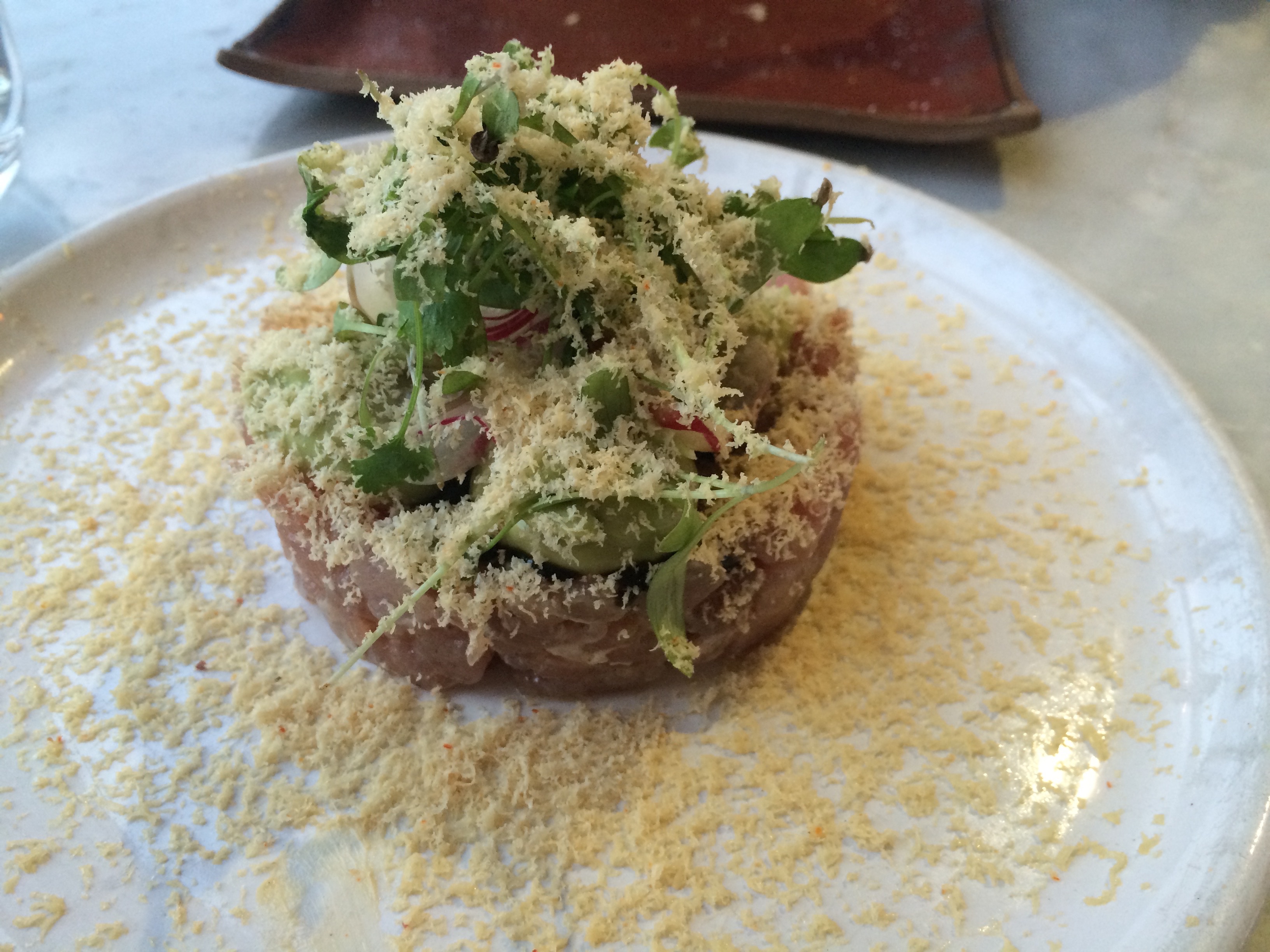 Having wandered through a long winding corridor with no reception desk along the way, we came into the bar with its views towards Stratford on one side and the City on the other. There was still no member of staff, let alone actual reception desk, to welcome us, just a large table in the centre of a small room and glasses hanging down over it so that you could not see to the other side of the room. Walking in, I spotted what looked like a reception desk tucked into the far corner, though it was unmanned, resulting in our waiting for a good 5 minutes before anyone arrived from inside the restaurant to greet us (nobody in the bar, not even the their head barman – I recognised him from the drinks section of the restaurant’s cookbook – who seemed to be too busy hugging and chatting to the woman who was in the lift with us to be bothered to come over and offer help).

When someone finally arrived they took their time, acting as if this was a hardship for them and that they were doing us a real favour. There appeared to be little organisation at this point and finding our reservation seemed to take an age. I thought she was waiting for our table to be ready, but that clearly wasn’t the case as the restaurant proved to be half empty. Finally, we were shown in by another more friendly member of staff who, when I asked if we could have the free table by the window, rather than the one she showed us to, was good enough to let us have it.

When you are up one of the tallest towers in the City, what view do you expect? The City? St Pauls? Not, I’m guessing, the ‘delightful and picturesque’ lands of Tower Hamlets and Hackney laid out before you to survey, because I’m afraid that’s what we got and what a majority of diners will have, given the direction the restaurant faces; for the ‘good’ views you need to be in the bar, but then they are partly blocked by other towers.

The first dish to come was the violet artichoke and parmesan bread, which can’t be faulted. It was a base of dough topped with the cooked artichoke and finally melted parmesan. As I say, it really was good and one of the best of this type of bread dishes I’ve eaten.

The yellow fin tuna with avocado, balsamic reduction and foie gras was next to be served. I have to say that I’d forgotten this came with foie gras and it wasn’t a discernable flavour. This aside, the dish was pleasant and fresh, with the balsamic and avocado puree going nicely with it, though we felt it could have done with a bit of salt and a wedge of lime just to lift it and provide some oomph. 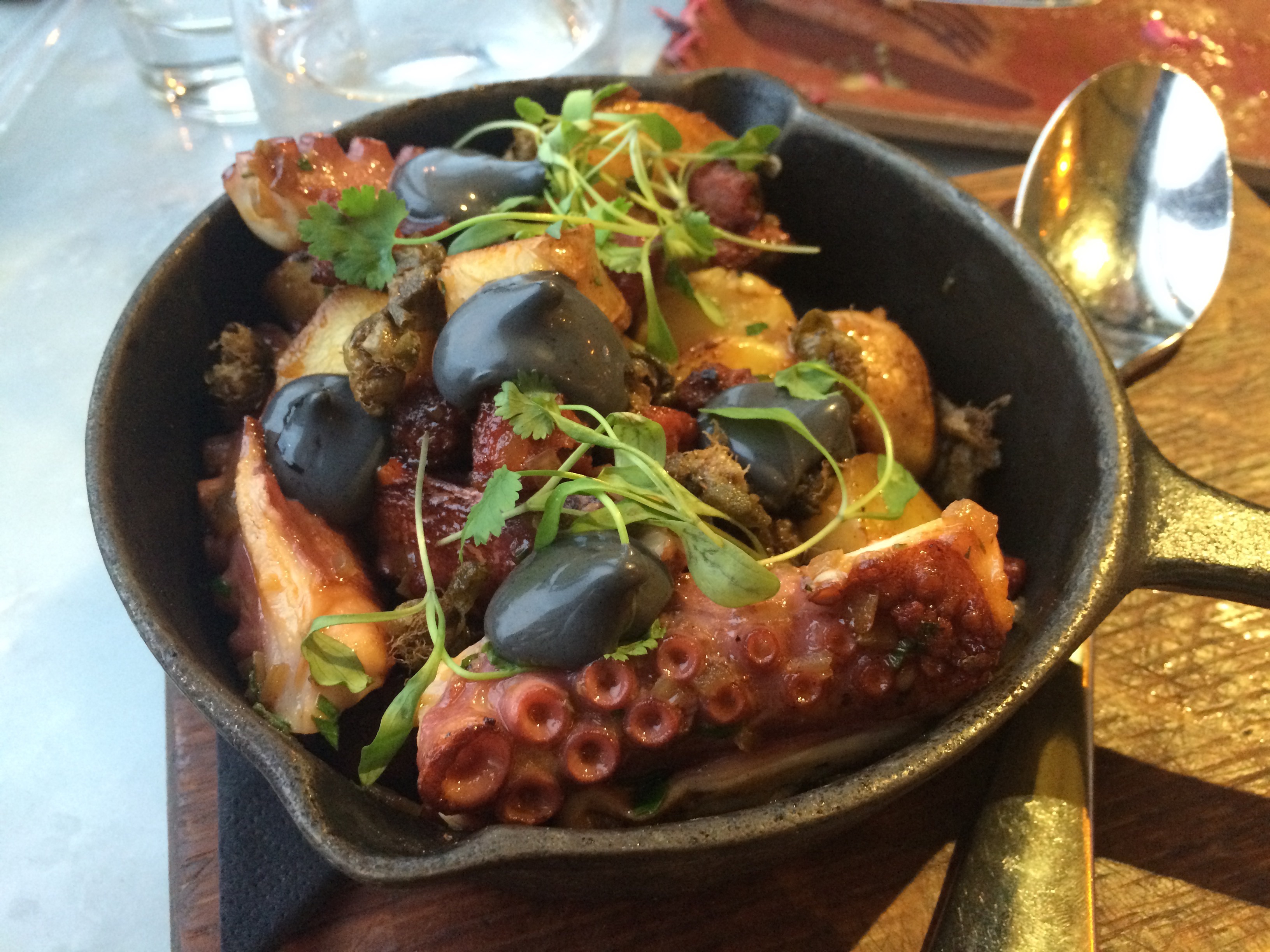 The octopus came next, a dish that I was looking forward to. The octopus was beautifully tender. It is, of course, a classic combination: octopus, chorizo, potato, capers and lemon. All was done very nicely and the clear twist from the norm was that the lemon was cooked in with the dish, rather than lemon juice just being squeezed in, so that it had that bitter lemon flavour you get from cooked lemon pith. The only disappointment was that, as with the tuna, though it was executed without a fault, we were left feeling that something was missing flavour wise.

One thing’s for sure, though, you couldn’t claim the foie gras crème brûlée was lacking flavouring or seasoning. Its problem was that the buttered lobster that topped it, despite being perfectly cooked, was entirely indiscernible thanks to the rich toffee like flavour of the brûlée and the rich butteriness of the toasted brioche. Indeed, the overwhelming taste was foie gras covered in toffee.

I have spoken about the service when we first arrived, but I should say something about it during the meal. The staff seemed friendly and all were busy doing things, but none of the things they were doing appeared to involve looking after the diners; the only interaction with them seemed to be in taking orders and the delivery and clearing of food at the tables. I am not saying I want lots of engagement from waiters but I do expect more than their putting down the food and immediately walking away; it would be nice to have some sort of acknowledgment that the diners are more than just cattle.

As a final word, I would say that our experience at the restaurant left us somewhat empty in spirit. The service wasn’t overtly rude, just more non-existent and, when there was interaction, it was limited and uninterested in our presence there or the fact we were paying a not inconsiderable sum. The food, with the exception of the mackerel, was well prepared and had flavour but most of the dishes left us feeling dissatisfied – just as the view did. I’m sure if you’re a regular they are probably very friendly and good with you but, after our experience, I don’t think we will be going back.

Despite this Duck and Waffle, and its sister Sushi Samba are both going strong and opening new venues. Sushi Samba is opening in Covent Garden, having taken the terrace restaurant spot in the main square, while Duck and Waffle Local has opened in the St James’s Market development. Maybe we just suffered from an outlying experience.