When one thinks of Italy it is the traditional image that comes to mind, the one with beautiful romantically crumbling Renaissance buildings, churches, Roman ruins and large family lunches in the bright sun around a table laden with food. You can almost smell that balmy air and taste that whole grilled fish, roasted suckling pig, grilled vegetables, rosemary, lemon roasted potatoes and vittelo tonnato and homemade pastas with simple sauces, that’s all been lovingly prepared by three generations of the same family.

But that image is the Mediterranean Italy of the South and to a lesser extent the centre of Italy. As you go north into Lombardy and Piedmont the hills of central Italy turn to mountains, and the food and architecture begin to change. The classic Renaissance buildings start to disappear in favour of increasing amounts of the Baroque and, more importantly to the region, Rococo architecture, while the food, still simple and homely, becomes more earthy and richer, hearty ste 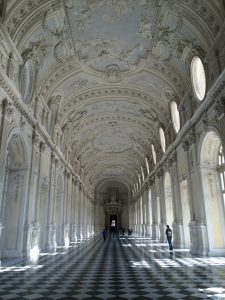 Turin, however, both fits this image and doesn’t. It is quite different to anywhere else in Italy. Given its history as the capital of the Savoy dynasty (later rulers of all of Italy after the Risorgimento), a dynasty that looked towards northern Europe, due to its boarders with France and Switzerland and its close ties to the Holy Roman Empire, this is perhaps not surprising. The architecture is closer to French and German Rococo than Italian, but also plainer in many ways.

The food, just like the architecture, is northern Italian but also somehow different, and this brings me to the point of this article: offal. The offal of Turin is like no other offal I have eaten before. Most offal you find on menus in the UK is liver and kidney, with the occasional offering of duck hearts. If you are after more exotic forms of offal you have to head to either a restaurant that is all about extreme nose to tail eating or to a Chinese restaurant. Not so in Turin.

Of the 4 or 5 restaurants I dined at in Turin, two were great Italian trattorias and each of them had offal and game “all over them”. In the course of these two meals I found myself eating raw sweetbreads, cooked sweetbreads, brain three times, tripe twice, chicken livers and cockscombs. With the exception of the cooked sweetbreads and chicken livers, all were new experiences for me, and ones that came about accidently (at least in the case of the first meal).

The first trattoria gave a very limited English translation of their menu (though, having looked at the Italian version, it too has limited descriptions of the dishes). I decided to order the carpaccio of raw sweetbreads, followed by ravioli with offal stew before a main of offal. That was the extent of what the menu said. The sweetbreads were exactly what I expected, raw slices of sweetbreads. They were served with a coronation chickenesque sauce along with croutons and parmesan (see top right picture at the start of this article). I have to admit that I hadn’t actually expected the sweetbreads to be raw; I had assumed that it was a bad translation. In reality it turns out that raw sweetbread are actually not bad at all; they are just a creamier and richer version of a cooked sweetbread and, while I’m not a fan of coronation chicken sauce, it, along with the salty croutons, made for a very good combination. 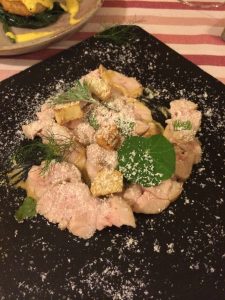 More surprises followed. First, the ravioli (top right) arrived with its offal stew, a stew made of an offal I had never had before. After some consideration and checking came to the conclusion it was brain, though brain of what I couldn’t say. It was actually very nice, with a soft yet firm silkiness. The real surprise was the main course (middle last page), a selection of four piles of offal of some sort. Two it turned out were brain, one of which was simply a fried piece and the other consisted of lightly battered strips, not dissimilar to tempura, with a balsamic reduction. The other two piles of offal were different types of tripe, one in a tomato reduction and the other in the same coronation chickenesque sauce used for the sweetbreads. The brains were much as before, the fried piece rich and creamy and the tempura was light and rich with the balsamic cutting through the richness nicely. The tripe itself was flavourless with all favour coming from the sauces, helped by the sea salt scattered around the sides of the slate board.

As you can imagine, it was quite the unexpected meal, but one that I was glad to have had even if by the end I felt a little queasy from all the richness. Having never had such offal, by my last night in the city I was up for trying more varieties for the first time and, finding a traditional Piedmontese ‘finanzera’on the menu, I couldn’t resist. This dish (bottom picture previous page) is a stew of sweetbreads, chicken livers (or giblets as the menu put it) cockscombs and mushrooms in sherry and vinegar, topped with a battered piece of brain and a chard slice of courgette: a full on combination of offals and one that I can highly recommend ordering if you get the chance. While the liver was overcooked (something that seems to be the standard in Italy), everything else was perfect, with the sharpness of the vinegar and sherry both adding to the flavour of the offal and cutting through the richness of the sweetbreads and brain. The cockscombs were the only thing I hadn’t had before and really, once you’re over what they are (the secret to enjoying any offal I find), they were perfectly nice with only the slightest of flavour and a soft texture.

Turin’s a lovely city but I’d suggest visiting it as part of a wider trip; it has some beautiful features but for me it doesn’t hold you in the way other places in Italy do. If you do make it to the city or at least the region, do try the offerings regarding offal if it’s on a menu. This being said, I appreciate that sweetbreads, brains and the rest of it may be a bit too far for many people; certainly I have had to work up to them. So here’s a very British dish for one of my favourite forms of offal, kidneys. It’s great as a way to get either oneself or friends into enjoying kidneys, or frankly just as an easy dish for a lazy weekend lunch. 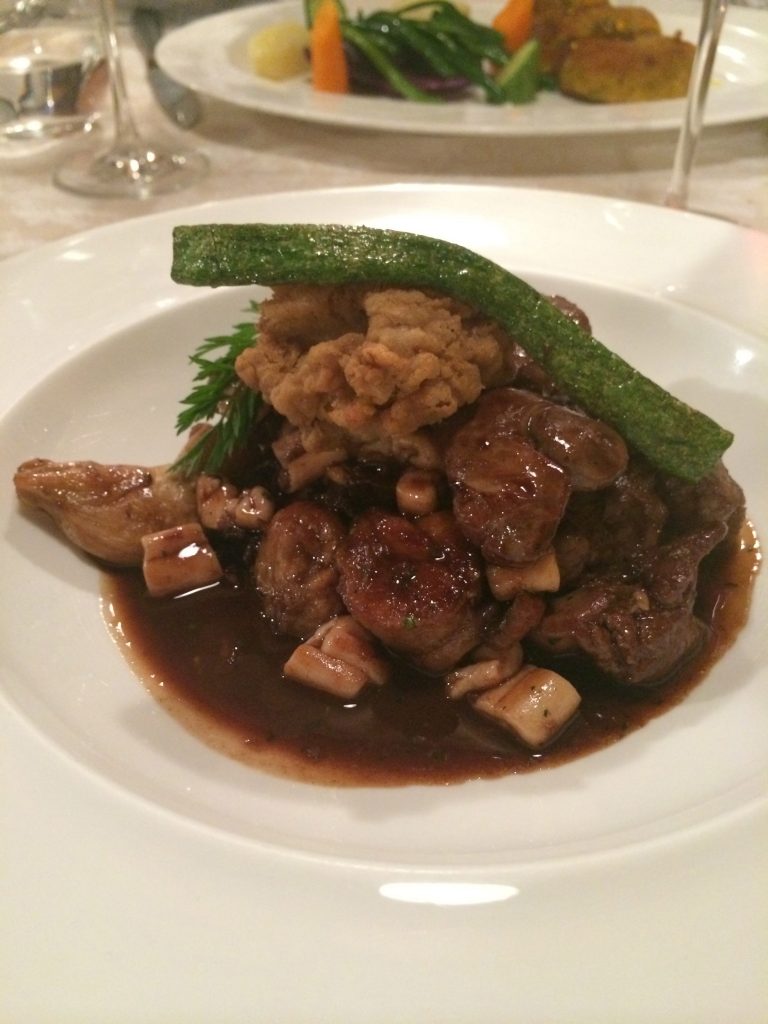