Beer has undergone a renaissance of late, or rather its underground resurgence of the last twenty to thirty years has become mainstream thanks to growth in microbreweries in Europe and the craft beer scene in the US. So powerful has this revitalisation been, that many of the multinationals have been buying up, investing in, or creating new brands to get in on the act. By no means is this the limit either; the high-end restaurant scene has been forced to change too. Gone are the days when Noma would be lucky to sell two beer pairing menus a month. Now restaurants like Le Gavroche are increasingly branching out and including beers on their drinks lists as alternatives to wine, and seeing sales grow year on year as people look for something a little different.

No one, however, has gone as far as Daniel Burns and Jeppe Jarnit-Bjergsø. A double graduate in Philosophy and Mathematics from Canada and a Danish runner-turned-teacher, these two are leading the way, thanks to the shared connection of René Redzepi and Noma, and a chance encounter. They have come in New York to create two almost unique Brooklyn dining and drinking experiences. Tørst is a Nordic influenced beer bar, and in a small room at the back, Luksus boasts the first ever beer-only tasting menu restaurant to be awarded a Michelin star.

Their book, Food & Beer, published today by Phaidon, is the first on pairing beer with fine dining. More importantly, it’s a statement piece-cum-manifesto about their creations, beliefs and views on the liberalisation of fine dining. As co-author and food writer Joshua David Stein says in his introduction, “past practice is increasingly losing its lustre” in all walks of life. From conceptions of marriage, to which nations can be allies, things have and continue to change, all thanks to the embrace by society of one fundamental question – one that has been at the heart of human endeavour since the beginning: “why not?”

It’s clear from the book that three key ideas drive all that these two revolutionaries do; that adventurous question, democracy (though perhaps more along Animal Farm lines due to commercial realities) and to “reveal the hidden value of the overlooked” by creating interesting and refined offerings. Nowhere are these ideas clearer than in the introductory essays. Through Jeppe Jarnit-Bjergsø’s tale of how he came to beer and eventually became a gypsy brewer with his Evil Twin beers, to Daniel Burns’s story about becoming a chef, to meeting Jeppe, and “A day at Tørst and Luksus”, you read the tale of the journey they have been on individually and together. It is fascinating. But, most importantly, you can see how their ideals are put into action daily in a real and tangible way at Tørst and Luksus, something that few restaurants manage despite what they say.

If there is one thing that you will take from this book, it’s that the world of beer and beer-making has its own astoundingly rich culture. Craft beer is, as evidenced by the names given to the brews, inherently open and democratic. It’s simple to make, and limited only by one’s imagination for flavour combinations – Jeppe references brewing with doughnuts as a flavour source. This all means that beers have huge variations in their profiles, allowing them to go with almost any food. Tørst and Luksus were conceived to showcase this.

Tørst serves a constantly rotating selection of beers from its twenty-one taps. Selected by Jeppe, his Evil Twin beers are served alongside rare brews, new and creative beers, and the offerings of other renowned microbrewers from across the world. Meanwhile, Daniel and his kitchen team of four offer up bar snacks and homely light meals to pair with them. This translates into the Tørst section (the first half) of the book, where Jeppe explores beer through ten different flavour profiles – bitter, sweet, earthy, sour, smoky, tart, spicy, fruity, tasty and my personal favourite, funky – and Daniel provides recipes for dishes that pair well with his selections. Beet beer paired with liquorice-cured trout on rye rugbrød, in the earthy section, and a Belgian Dubbel with meat pie, cranberry sauce and rhubarb crisp, in the tart section, both sound particularly interesting.

The second half of the book, Luksus, sees Daniel take the lead, taking us through the way he builds the constantly changing fifteen-course tasting menu offered in the sixteen-cover dining room that holds Michelin-starred status. Each course will have between eight and twelve elements, and a menu will start by showing the diner the kitchen’s raison d’etre, before showcasing technique through broths, and then the main dishes that bring it all together. To this Jeppe will each night build a beer tasting menu to complement the food, and similarly he pairs a beer with each of the recipes that Daniel provides in the book.

I would dearly like to say more about the book as a whole, and how the pair’s three philosophical prongs take form at Tørst and Luksus, but that would lead to me writing something of dissertation length, and more importantly it would rob you of the joy of discovering for yourself. For it really is a joy. What you read will excite you and have you asking “why not”, about this and many other things in food and drink. At the very least it will have you wanting to head straight for Tørst and Luksus, even if like me you have troubles with beer.

There is perhaps one negative to this superb book and that’s the fact that the recipes, even the simplest, are not easy for home cooking. But then that’s not their point – they’re not meant for that. They’re to show what the Daniel and his team can do, and it’s impressive to say the least.

If one other thing could come from this book and the resurgence of beer, I would hope that it would be a recognition of others doing similar things. From the more obvious cocktail pairing menus, to the tea paring menus of Paris’s yam’Tcha, another Michelin-starred restaurant that’s little more than a hole in the wall. Run by French chef Adeline Grattard and her husband, Hong Kong-born Chi Wah Chan, they are under taking a similar journey as Tørst and Luksus, but with teas from across the globe.

In all, a must-buy and a must-read for all interested in food, beer and the changing scope of the restaurant trade. 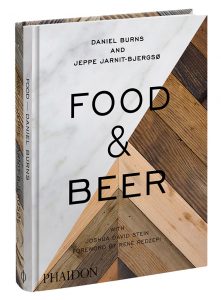