Thankfully, pizza has been undergoing a regeneration, and a global level one at that, for the last few years. London and New York are awash with new or newish pizza parlours, each with their own trademark style –Homeslice with its 20 inches of out-there imaginative flavour toppings is, for me, the best pizza to be had in London. As Italians are the originators of the dish, theirs should be best, so whenever in the country I have to have at least one pizza.

Bad pizza is, of course, very easy to come across anywhere, but in Italy it seems far more prevalent than elsewhere one goes – other than perhaps America. But thankfully Italy too has been seeing the renaissance of pizza. Among the leaders in this revitalisation are brothers Matteo and Salvatore Aloe with Berberè. First opened in Bologna in 2010, there are now two branches in the city, and further outlets in Florence and Turin.

The brothers are pizza obsessives and come to the table with differing but complementary skills to ensure that they produce the very best. Matteo worked as a chef in Bologna and Milan and had an internship in Noma, which has been taking in chefs who have then taken the skills they have acquired across the globe, using them on a food they’re passionate about. Salvatore, meanwhile, stayed in Bologna and studied business at university; it was his experience of eating poor-quality street pizza that convinced him of the need for change. Berberè was thus set up to provide the freshest, lightest pizza possible and Acle Nero, an organic farmers collective, has partnered with them on one of their Bologna pizzerias. 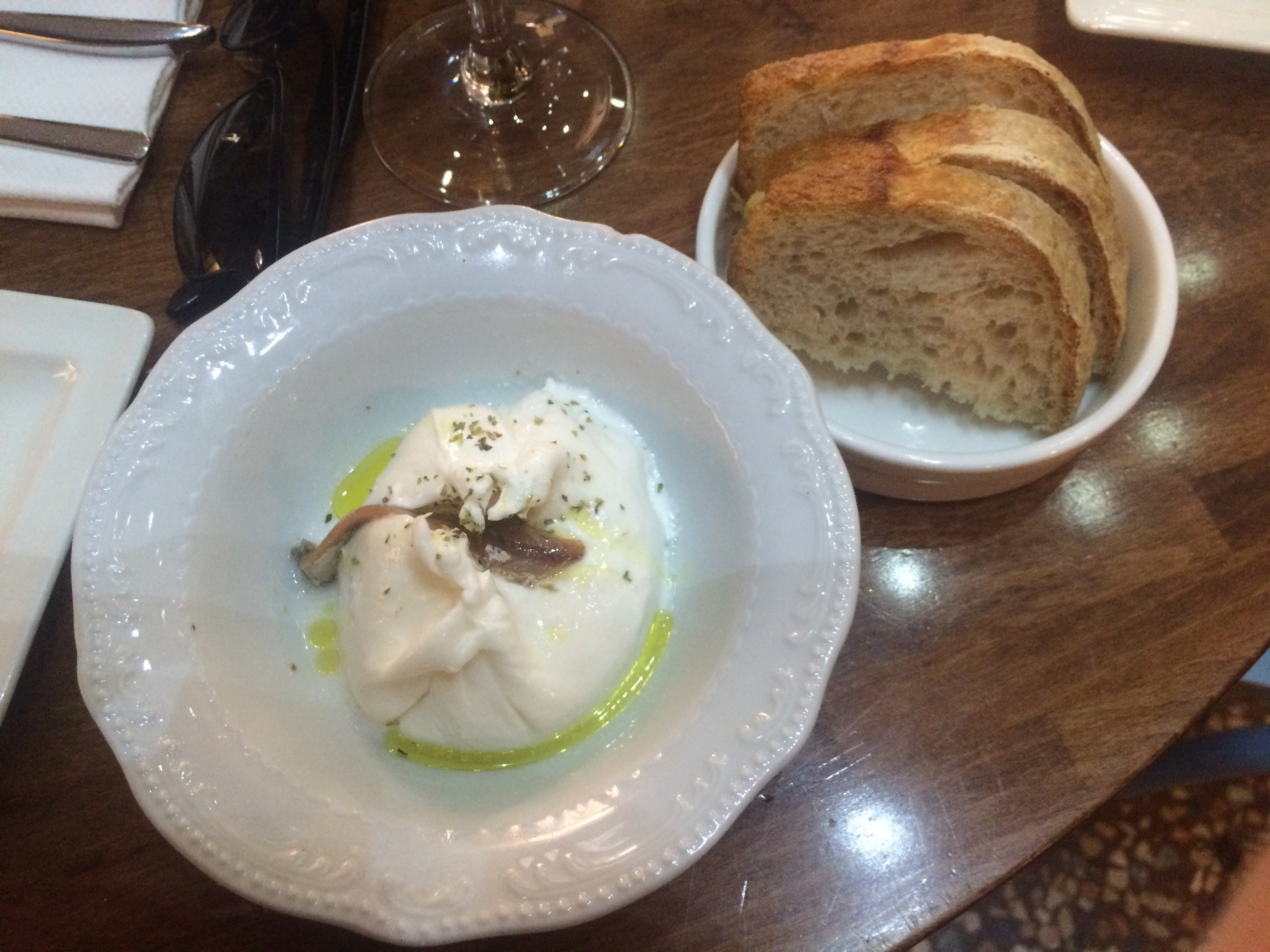 Attention to detail is paid at every level. Ingredients are of the highest quality and lightly handled – ham, for instance, isn’t cooked but applied after the pizza has been cooked. When the pizza comes, it’s as if the toppings have just been lightly placed onto a cooked base rather than piled on and then cooked, as is the norm elsewhere.

Key, of course, to any pizza is the dough and, oh me, oh my – oh, you – the Berberè dough is like nothing I’ve had before; the whole cooked base is like a light fluffy cloud. Each pizza’s dough comes from a mother dough that’s kept cool and at a pH between 4.3 and 4.8, allowing perfect fermentation over the next twenty-four hours. This all means that, when cooked, the 280g of dough they use (most pizzerias use 220-260g, spread thin) isn’t overly stretched and rises in the oven, creating large air pockets, while the crust takes on a caramelised quality, giving great flavour and lightness. You can even choose between the normal dough, using the highest quality flour, or their “special dough”, using other grains.

Visiting the Alce Nero Berberè, you are presented with a large open space with the kitchen at the back and vibrant murals in keeping with the chain’s designs. It is reminiscent of a converted warehouse, given the black-brushed thin metal window frames, and of the vibrant Soho area of Buenos Aires, or indeed, appropriately enough for its location, a student liberal café. 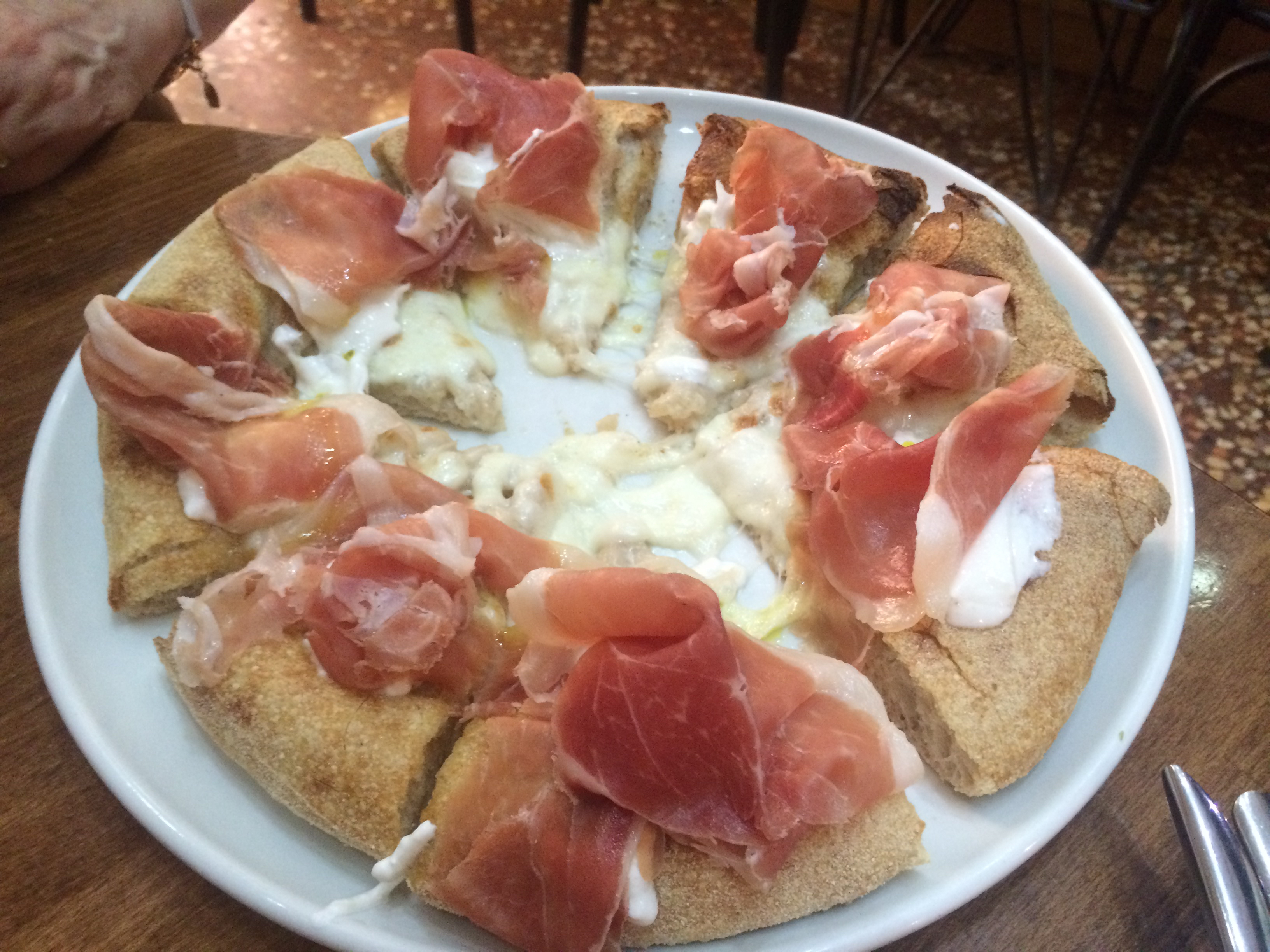 The pizzas are spilt into those with tomato (red) and those with fiordilatte (white/cheese) bases. The red pizzas have choices of more conventionally recognisable toppings like tomato, buffalo mozzarella, and basil, or anchovies, tomato, and oregano. However, the most interesting toppings can be found on the fiordilatte bases.

The potatoes, asiago d’allevo dop and pancetta fiordilatte, the chargrilled prosciutto, sautéed fennel, and taleggio dop fiordilatte and the black pepper speck, gorgonzola, walnuts and acacia honey fiordilatte, and the prosciutto crudo, burrata and orange-infused oil fiordilatte were ordered to share among the four of us. While we waited, we split a burrata with anchovy and oregano; a lovely combination with oil, salt and pepper sprinkled over it – the only thing lacking was more anchovy fillets.

Each of the pizzas was so well made that it’s hard to say which was my favourite. Each ingredient was used sparingly so as not to overpower the others, meaning that they both stood out individually and sung together harmoniously, all the while being set off by a beautiful base.

Alce Nero Berberè has achieved all that its owners have set out to do. The pizza is faultless, the service friendly, the ambiance light and fun and the wine list is by far the best I’ve ever seen in a pizzeria. It’s well worth a visit. After all, Berberè hasn’t been described as “currently the best interpretation of pizza in Italy” for no reason.